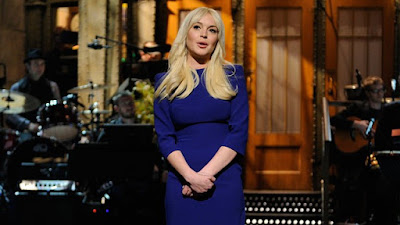 So Lindsay Lohan is attempting a comeback?

After viewing her sit-down interview with Matt Lauer on The Today Show, Lohan announced her desire to resuscitate her career in a way that is productive, and not the tabloid covered, TMZ filled, and head-shaking reputation she has earned over the last few years.

Whether you cared or not, it's very hard to neglect not being aware of this young adult, who began this descent at the still-young-age of eighteen. We all remember hearing about her on the nightly news or even CNN with the pictures of fall. Her descent due to drugs and jail, which is co-signed by her sudden change of went being debated amongst every teenage boys top ten list to becoming grossly unrecognizable, is borderline tragic.

And that's all without mentioning the absolute lack of parental structure she had.

How the Lohans sleep at night is beyond me.

Nonetheless, if this comeback is legit, 2012 could give us yet another inspirational story.

Usually, I am skeptical about "comebacks" like this as they always seem shallow. As is the case in life, actions speak louder than words, and in this case, big interviews with important people.

Yet, with all of the warm felt stories we have endured so far in 2012, why not?

Why not believe in this?

Lohan, who has spent the last five years wasting talent and perfecting the art of finding new personal lows to hit, fortunately has time to turn things around. And can do so in a big way.

Of course, it is up to her.

A former Dome Pondering "Just Go Away Award" winner, Lohan has an opportunity to rewrite her story to finish on the happier end of the the spectrum. In fact, Lohan, whose career beyond the always-on-weekend-television movies of The Parent Trap and Mean Girls, is synonymous with drugs, promiscuity and jail.

And while the jury is still out on the commitment to this comeback, I can't say that I am a huge fan of hers, but yes, I am rooting for her.

Fortunately, while this nation is enamored with train wrecks and watching others deteriorate before our eyes, we also love the comeback story. And especially, the underdog story.

She began writing her own story this past Saturday night by hosting NBC's Saturday Night Live. And while reviews have been mixed, and some are clamoring for her to indeed go away before ultimately coming back, the overall experience seemed like a good one for Lohan. She managed to make fun of herself throughout some of the skits on the show which is a positive, however, struggled through some lines in doing so. Ultimately, she still had enough intrigue and drawing power to spike the ratings.

Whether her comeback is motivated by Linsanity, doing the right thing, or for financial reasons, or even all, the journey back for Lohan will be a tough one.

And drawing from her SNL appearance, no comeback is perfect.

However, for her sake, I hope she is truly genuine about turning over a new leaf.

For whatever her purpose may be - underdog stories, ambition, or finance - her comeback should look no further than being scared straight by the tragic death of Whitney Houston.

If there is anything the death of Whitney Houston has taught us, its that a lifestyle of drugs is a dead end, and more importantly, a wasted life is a huge tragedy.

Fortunately, Lohan has ample time for a comeback...

...but unfortunately, that time is now.