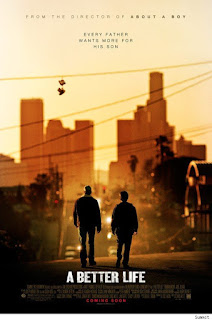 In an attempt to provide a better life for his son, an illegal immigrant in East L.A. struggles amidst issues of immigration, neighborhood gang life, and financial woes.

After finding an escaping Santiago, the man that stole his truck, Luis tackles him and pummels him. Carlos finally catches up and tells Luis that its enough. Carlos searches Santiago for the keys and finds a money transfer receipt of $3,000 to Mexico. Carlos then stares at Santiago with a look of empathy, rather that hate.

"I don't understand it. Why do all of these poor people have kids? What's the point?"

A Better Life is a much better movie than you would expect after reading the short summary on the back of the DVD case. Actually, A Better Life is a damn good film, and one that should be amongst the best in 2011. The film's plot surrounds the issues of illegal immigrants and their quest to provide a better life for their American born children. The film gives a different look than the usual, and very stereotypical, viewpoint of immigrants and their objectives, and includes a much needed focus on the clash of cultures and lost heritage between illegal immigrant parents and their American children.

However, what the film does really well, is it's ability to keep the issues and characters real. By doing this, A Better Life provides a film that is very emotional. Often, the term is throw around, but A Better Life has an innate ability to connect with the viewer, cause you to fall in love with the character, Carlos and his overall kindness, and the boundaries he is willing to cross to give his son a better life.

A Better Life is very much worth the watch. Very much recommended for migrant families and children. Demian Bichir's performance is worth the Oscar nomination he received for the film.

All in all, go out of your way to see this film. And for the easily emotional, having a box of tissues nearby is a must.