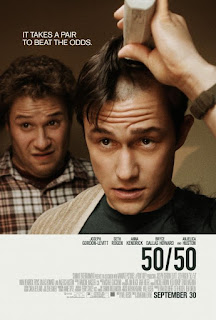 The life changing process, struggles, and humor a young man goes through in his battle with a cancer diagnosis.

After asking to drive Kyle's car before his final, life-deciding surgery, Kyle drives recklessly before kicking his best friend out of the car and letting out plenty of pent up rage. Kyle then calls his therapist, and lets her know how truly he feels about her.

Adam: That's what everybody's been saying: You'll feel better and don't worry and this is all fine and it's not.
Katherine: You can't change your situation. The only thing that you can change is how you choose to deal with it.

50/50 is a very good film that offers a range of emotion. The film, loosely based on a true story, does a great job of taking the issue of cancer and presenting it in a real, challenging, honest, and very rarely seen, a humorous way. From the way the main character, Adam, is diagnosed, to his personal struggles of attempting to hold it together, 50/50 gives a different outlook on the journey of fighting the deadly disease.

It is rare to see Joseph Gordon-Levitt not deliver an awesome performance in a main role, and his portrayal as Adam is more of the same. Seth Rogan, of course, as only he can, delivered some comedy as the wacky best friend. And similar to Gordon Levitt, Anna Kendrick is always solid in her supporting roles.

50/50 is a great, honest, entertaining movie. A solid film that gives a different perspective on the true emotions, including the hidden ones, in dealing with a diagnosed loved one.