The All-Star Clash continues with more first round match-ups.


Here is the updated bracket.

Also, as a reminder, the selected first round topics are: 1. Greatest Accomplishment; 2. Most Likely to Lead in a Musical; and 3. The Man'ti Teo topic of Least likely to have an Imaginary Girlfriend. 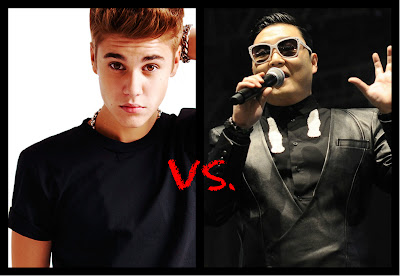 1. Greatest Accomplishment - For Beiber, its pretty much becoming a hit pop sensation at a very young age and managing to keep that super-stardom going. Whether you dig his music or not, Beiber is indeed very talented. As for Psy, Gagnum style has been, and was the pinnacle. Of course until we can judge that long awaited second track that is supposed to be released soon. No contest here. (Beiber 1-0)

2. Most Likely to Lead in a Musical - Psy doesn't even sing in English, and at this point, is very much a one trick pony. Beiber has enough star power to carry a musical by himself, even if he was terrible at it. Another easy one, as Beiber dominates the 1-8 match-up. (Beiber wins 2-0). 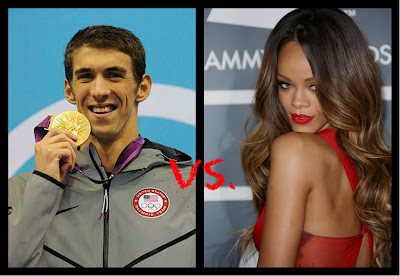 1. Greatest Accomplishment - Ummm, do we even need to really delve into this one? 22 Olympics medals, 18 which are of gold. Rihanna? Rihanna? Yeah, I think she's moved onto the next one as well. (Phelps 1-0).

2. Most Likely to Lead in a Musical - I've seen those Phelps Subway commercials, and acting is not Phelps' thing. Actually, it's not Rihanna's either (see: Battleship), but she might be closer to actually pulling off a good musical with her voice, sex appeal, and performance ability. (Tied 1-1).

3. Least Likely to have an Imaginary girfriend/boyfriend - Now this is tough. As we all know, Rihanna is never afraid of letting the world know who her latest beau currently is. While at the same time, there really is no need for Michael Phelps to rely on the imagination when it comes to this topic (just see "greatest accomplishment" above). However, Rihanna seems more controversial, and this sort of deal seems more up her alley than it does Phelps. (Phelps wins 2-1). 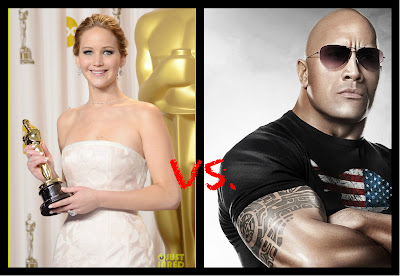 1. Greatest Accomplishment - If we want to keep it strictly apples to apples, we'd look at this: Silver Linings Playbook vs. Any movie The Rock has appeared in. I like The Rock, obviously the wrestling version, but his movies have been OK to good. Jennifer Lawrence was amazing in SLB. (Lawrence 1-0).

2. Most Likely to Lead in a Musical - As good as Lawrence was in SLB, I just can't see her gracing the stage for a musical. As for The Rock, he's already done such things on WWE TV, and let's be honest, he's the most eletrifying man in allllllllllllllllllll of entertainment today! (Tied 1-1).

3. Least Likley to have an imaginary girlfriend/boyfriend - Another tough one as I really don't think either one have the need to do so. Sooooooo, this comes down to gut feeling rather than insane logic. Being the Rock, I feel at some point, one of those stories he's told on Raw were a lie, and that's all I need to crack this deadlock open. The beautiful Jennifer Lawrence moves on. (Lawrence wins 2-1). 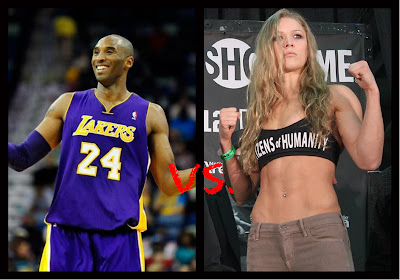 1. Greatest Accomplishment - While what Roussey did for women sports recently with her big fight with Liz Carmouche for the UFC women's championship was historic, it still lacks in comparison to the 81 points in a game, or (pick one) championship season that he has earned. (Bryant 1-0).

2. Most Likely to Lead in a Musical - Ronda Roussey is rugged, tough, and also pretty attractive. Nothing showmanship about her. Bryant of course can handle the big stage, and even dabbled a bit in a, albeit failed, rap career. We'll give him the showmanship nod. (Bryant wins 1-0).