It is indeed back! The Dome Pondering All-Star-Clash. The mid-year clash of random celebrities, athletes, characters, and I-know-yous that started last year and caused several heated debates among readers, has returned for a second installment. Random names have been selected based on their relevancy and popularity since June 2012, and have qualified for this year's clash. As always, they are seeds, and random series of random dynamics will select the winner, and of course, create much debate.


For those new to the concept, it is a best of three format in the first three rounds and the best of seven every round thereafter. All rounds are decided by random concepts that compare both in a clash that decides who is the better selection. Pretty simple. And yes, once again, this is all for fun, contrary to the feedback received last year over the Batman over Peyton Manning DP finals result.

We'll begin in the "Wrigley Field" region under the following selected topics for the first round: 1. Greatest Accomplishment 2. Most Likely to Lead in a Musical and the newly Man'ti Teo topic (yes, very much mocking the now-NFL draftee) 3. Least likely to have an Imaginary Girlfriend. 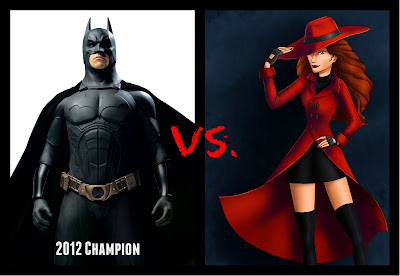 1. Greatest Accomplishment - I think this one is pretty evident and clear. The 2012 DP Bracket Champion defended Gotham City from the likes of every villain without relinquishing his identity or most of his wealth. While Carmen Sandiego had her own television show, she rarely, if ever let anyone win on her show. Actually, she ruined the hope for many kids on that show. Champ goes up early here. (Batman 1-0)

2. Most Likely to Lead in a Musical - Tough one. Batman surely had the martial arts training which would help in the dancing. However, if you've ever seen anything related to Batman, he isn't the most extroverted character. Really, he's pretty dark and grim, and nothing screams musical, and random song and dance more than being dark and grim, right? And yes, that was sarcasm. As for Carmen Sandiego, she had flare, style, and ability to move on a whims notice. C'mon, look at that profile picture! (Tied 1-1)

3. Least Likely to Have an Imaginary Boyfriend/Girlfriend - Batman fell in love. We know this. Some of us may know the comics, but we've ALL seen the movies. He had feelings, and to be honest, he's had quite the selection to choose from (Michelle Phiefer, Halle Berry, and Maggie Gyllenhaal to name a few). However, who is Carmen Sandiego? Barely anyone has ever caught her. Heck, we are always trying to find out where she is in the world? Seems fishy and sketchy to me. As for a boyfriend, yeah, I'm sure we don't know where he is either. Wink, wink. The Champ moves on here. (Batman wins 2-1) 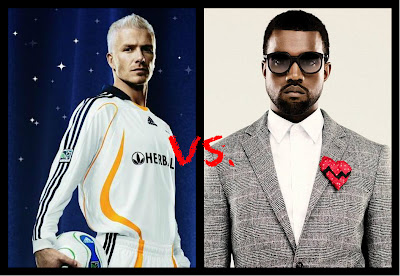 1. Greatest Accomplishment - For Kanye, I would have to say his producing career. Honestly, isn't it weird the arc his career has gone? The more popular he's become, the less productive. As for David Beckham, he is world renown, and has won at every level in soccer. (Beckham 1-0)

2. Most Likely to Lead in a Musical - Kanye's entire career is in music, but he's one of the rare crossover names that isn't known for being talented in anything else. Check it out. Jay-Z, mogul. Dr. Dre, actor, headphones, soundtracks for movies. 50 Cent, mogul. Snoop Dogg, acting.  Eminem, acting. Tupac, acting, poems, activist. Kanye, ummm Kim Kardashian, and interrupting Taylor Swift? Beckham is pretty limber on his feat, and has already lived in Hollywood. I believe he is much closer than Kanye is. But hey, he'll just interrupt and let us know that Billy Elliott was the best musical of all-time, right? Just saying...(Beckham wins 2-0) 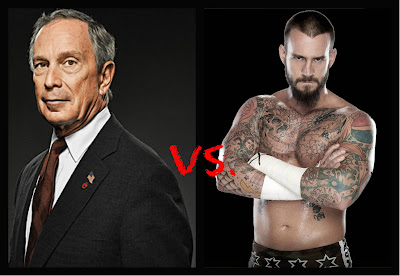 1. Greatest Accomplishment - I'm not sure, but speaking for the Mayor, I'm sure it's a tie between helping this city move on after the days following 9/11 and the accomplishment of becoming richer than any of us can really imagine. For CM Punk, what's there to think about? Obviously, it is having the longest WWE championship reign in modern history as well as having one of the coolest entrances themes ever. As much as I dig CM Punk (although I think my wife likes him even more), Bloomberg gets the nod here. (Bloomberg 1-0).

2. Most Likely to lead in a Musical - Ummm, Bloomberg has very little connection with an audience when he is trying to portraying messages of importance. Especially his utterly poor attempt to do it in Spanish. For goodness sakes man, just hire a translator! CM Punk is a pure athlete and performs for a living. Yeah, this is evident. (Tied 1-1).

3. Least Likely to Have an Imaginary Boyfriend/Girlfriend - CM Punk has dated some pretty good looking women in his time. And he's a pretty straight forward guy. Doesn't pull any punches and tells it like it is. Pipe Bomb! Only wrestling fans would get that. However, while Bloomberg has a girlfriend, who I happened to indirectly work for and have met several times, Bloomberg just seems like the type of guy to hide things. After all, he is pulling an Oprah and not marrying his "longtime girlfriend". Not a very clear win as Bloomberg seems shady and  Punk seems least likely to pull a T'eo. (CM Punk Wins 2-1). 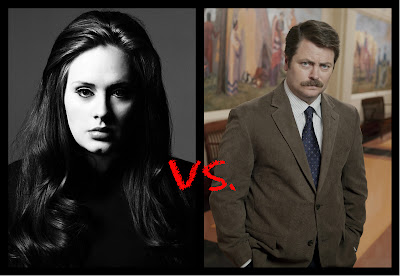 1. Greatest Accomplishment - Ron Swanson doesn't do much which really is what makes his character awesome. He does very little at work, while enjoying the simpler things in life. Adele, well, just check the list of the last two Grammy Awards winners. Very easy choice here. (Adele 1-0).

2. Most Likely to Lead in a Musical - This might be the easiest match up so far in the bracket. Can anyone see Ron Swanson EVER in a musical. Seriously, like EVER? (Adele win 2-0).