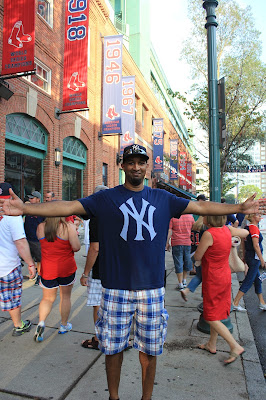 I've been meaning to visit Fenway Park for a long, looooooooooong time. As much as a Yankee die-hard like myself won't admit it, it is one of the few rare treasures left in Major League Baseball. Obviously, up there with the likes of Chicago's Wrigley Field.

Due to working in Parks and Recreation in the past, summertime was often the busiest time of the year, and quite frankly, Fenway Park's sellout streak made it very difficult to acquire tickets. But, that all changed this year. Summers are open for yours truly, and the sell out streak is over.

With a mini-vacation planned for Cape-Cod, I lucked out that my boys of summer happened to be playing the hated Boston Red Sox at Fenway Park this past weekend. I figured why not? I would be able to kill two bucket list agendas with one trip - Visit Boston (2013 Bucket List - Visit City of Boston) and Attend a Game at Fenway Park.


First thing is first, there are many more Yankees fans in Boston than I anticipated. Rocking a Yankee shirt and hat in the rival city, I expected to be the focus of ridicule and usual sports fandom jeers, but was oddly met with a few "Go Yankees" greetings as we wandered around Boston.

Even when we rode the T, we were with other Yankee fans. And let me tell you, seeing pinstripes and midnight blue among all of that Red Sox stuff was beautiful.

So yes, I didn't get killed. And honestly, it killed a stigma I had in my head. The rivalry in both cities pretty much endure other fans. But I still think Boston is a bit more obsessed with hating the Yankees than the other way around.

As you come out of the T-station (Is it even called that?), you realize how old-school the park really is as it literally sits on a city block. Lansdowne Street, Van Ness Street, and Yawkey way are filled with bars, shops, and other pre-game festivities that really make it feel like a cool spectacle. As my wife stated, it feels like a little street festival outside of the stadium, which I must say, is something I miss at the old Yankee Stadium. Damn that corporate feel it now has! 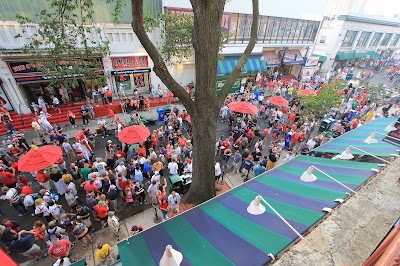 It was a little odd at first that the entrance/gate/security was out in the street, but it is totally understandable for the logistics and layout the park has to work with.

As for the park, as I've pretty much responded to some on Twitter or personally, Fenway Park has tons of old-school charm. Because, well, it's still old school! After walking around the entire stadium, besides the ridiculous seats placed behind columns, there really isn't a bad seat in the park. None. All still make you feel like you are on-top of the field, and adds to the intimate feeling. 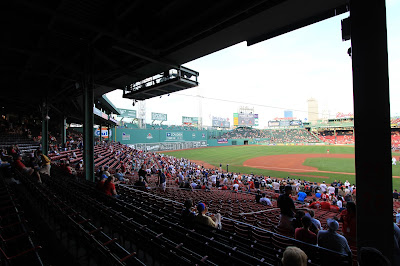 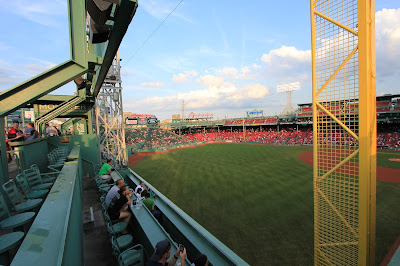 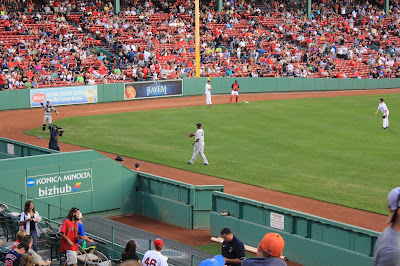 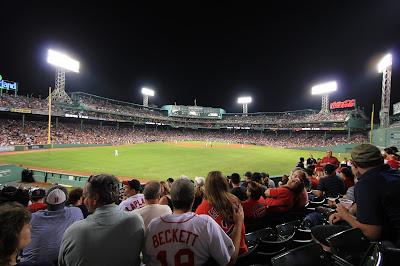 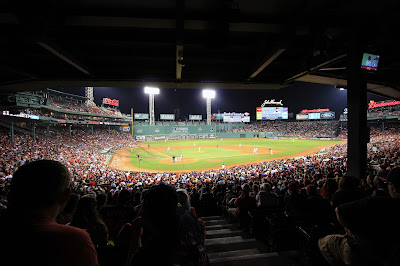 The Monster seats are also awesome for the comfort in comparison to the ridiculously small and narrow seats that line the stadium. And by the way, Fenway Park's seats and rows are insanely small. I get they have to squeeze in as much as possible, but they really are uncomfortable. Can we also get some new chairs? Going into the 8th inning, I started to miss the padded seats at most new ballparks.

However, though it lacks amenities, I will honestly say this, because there is nothing else to do in the stadium besides watch the game, there is a certain vibe and electricity at Fenway. Maybe I got lucky because it was Yankees/RedSox on national television, but everyone is into the game. Something I can't say for the newer ballparks, especially the New Yankee Stadium (and Citi Field) which is filled with hundreds of other things to look at it or experience. Damn those stupid clubs! I still think they're a bad idea inside sports arenas.

As for the atmosphere, I got heckled a bit for my Yankee gear. Red Sox fans were feeling quite confident with their 1st place status. Although, some were having fun with the rivalry, including one guy who wanted to take a picture with me just because I was a Yankee fan. We chatted and I granted him his wish. That's what makes the rivarly fun, right?

However, this is where I have to say Red Sox fans have to get creative. Actually, they MUST get creative going forward. The two chants heard all night were either, "Let's Go Red Sox" or "Yankees Suck!". We chose to sit out in the bleachers with the real, rowdy fans. It get's tired really fast.

And I especially loved their fascination with doing the wave. I hate the wave at any event. It's stupid. But, I did get a big kick out of them suddenly going into shock when my boys tied it after a series of waves went around Fenway. 7-7. Tie ballgame. Quiet Fenway. And me doing fist pumps in my seat to the annoyance of those around me.

Quiet Fenway Park = A happy me.

Nonetheless, the Red Sox fans got the last laugh in the bottom of the 11th in what truly felt like a Yankees/Red Sox game - Long! Well over five hours long. A walk-off by Mike Napoli and watching Sox fans rejoice made the long stay that much more painful. Luckily, we watched the walk off home run from seats behind home plate and were no longer vulnerable to fans out in center field where the home run landed.

But with that said, kudos to my wife who I knew was tuckered out after traveling up to Boston, walking the entire city, eleven innings of Yankees/Red Sox baseball, and had to get the motor going for a hour and half drive to Cape Cod at 2am. And yes, we arrived on the Cape at our vacation stay at 3:30am. A story we'll always have for sure.

I couldn't walkout of Fenway Park during a 7-7 Yankees-Red Sox tie game. And she knew it. She's a trooper.

All in all, much like the City of Boston, Fenway Park is a great place. It really is. A great place to watch baseball, especially for a baseball fan that appreciates everything that encompasses the sport.

I anticipate getting up there again for another one of these games in the future.

But I can now say, I've been to Fenway Park...and even better, for a Yankees/Red Sox game.

Now, time to make plans to visit Wrigley...you know, before they start their plans to modernize it and all that jazz. And yes, I hope they don't put a freaking club in it either.

Courtesy: APIC for all photos