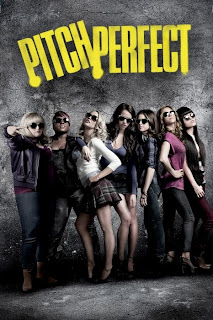 
After giving college a try at the urge of her father, Beca joins an a cappela girl singing group and gives them a sudden flair and energy boost needed to renew their image as well as to rival a boy's singing group at the University.

When all of the a cappella groups on campus had some sort of sing-off battle before regionals.

“This number is like an elephant dart to the public’s face.”

Pitch Perfect is not what I expected. From reading the movie description, I figured, "Oh alright, another one of those weird Glee-like movies". After all, as Anna Kendrick's character, Beca, says in this film, "Oh right, that's a thing now".

However, Pitch Perfect is very funny and really makes fun of the latest signing phenomenon in a tasteful way. The film really feels like Dodgeball, Bring it On, and the early-in-the season episodes of American Idol mashed into one. Just sheer goofiness and some classic one-liners throughout the film all while leaving you respecting the art form of a cappella singing.

Anna Kendrick is pretty good in her "too cool for school" role. And of course, Rebel Wilson as "Fat Amy" was hilarious.

Can't say it was terrible. Pitch Perfect is actually recommended.