ESPN Boxing? The Potential Is There! 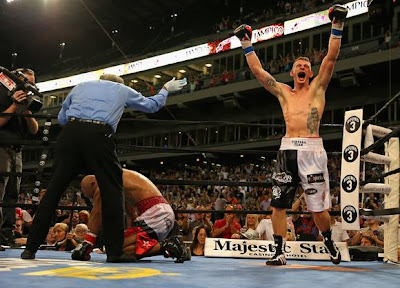 I often don't get around to catching ESPN's Friday Night Fights, but boy was I glad I did this past Friday night. Held on the field at U.S. Cellular Field in Chicago, the event had a unique outdoor feel for it's weekly show. With a packed and rowdy crowd, the energy of the event was clearly felt through the television.

However, besides the awesome fights, what really caught my attention was the enthusiasm of the announcers who genuinely sounded like they were into the product a lot more than their usual broadcasts. At first I thought maybe it was due to the outdoor broadcast and the larger event, but then they made comments throughout the night such as:

"This is the way boxing should be! No need for casinos, high priced tickets for celebrities, or crooked middlemen promoters. Just true fans and willing boxers!"

"This sport needs to get back to having nights like this. Where the real fans can help new fans learn to appreciate the sport" (In reference to the many fathers who were there with their sons instead of celebrities).

Whether you believe this was the typical case of announcers over-hyping an event or just getting carried away is your call. But after watching FNF and really enjoying the event, it's really hard not to see the breathe of fresh air that was in the product that night. And I'm sure, many who are in the industry, who are beginning to see a generation lose interest in the sport in favor of Mixed Martial Arts, had similar thoughts as well.

I wrote a piece in 2011 discussing what the sport of boxing needs to do in order to help revitalize it (A Four Step Plan To Revitalizing Boxing). Piggy backing off of those foundation elements, I wondered what if ESPN decided to foray into their own boxing venture? What if ESPN took the Friday Night Fights banner and parlayed it into a separate entity the way Zuffa and Dana White did with the UFC in Mixed Martial Arts?

No more WBC, WBO, WBA, blah, blah, blah...One organization - ESPN Boxing. ESPN is in total control of it. Fox Sports 1, a new competitor to ESPN in the sports network field also has Golden Boy Boxing, spearheaded by Oscar De La Hoya obviously, and is looking to venture into the ripe-for-growth boxing spectrum.

ESPN has a chance to take something and really make it big. No middle men. No more loud mouth promoters. No more unequal fights. No more politics and corruption. They can sign the boxers. They can make the fights. They can continue to hold shows every week. They'll have the rights (television, marketing, and branding) to it, which means mass amounts of exposure on SportsCenter and their other avenues - a great start.

No to mention, with the ESPN brand truly behind it, structure would be in order. Title belts would mean something (one per division as opposed to the million currently out there). Also, most importantly, fights will fought when they are in demand, when they should be. A reason why the UFC is thriving is because we all get the fights we want to see. Unlike Mayweather/Pacquiao in boxing...the boat already sailed on that one.

How the other business deals work out as far as boxing commissions, sanctions, licenses and boards is unknown, because as we know, boxing is corrupt to the core. Nonetheless, if that can be worked out, and the numbers are worth it (of course it's about business, right?), ESPN has a chance to really do something big. A chance to change an entire sport.

All they have to do is take a look at last Friday Night Fights.

The potential is there. I'ts definitely there.