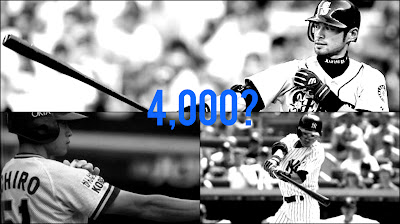 Is Ichiro's 4,000 hits legit? It's been a question floated around by many baseball fans this week as he approached and eventually eclipsed the well..."milestone". Some believe the numbers from Japan shouldn't count, and others simply look at it as a way to celebrate something that has rarely been done in baseball - any professional baseball. You know, because this would involve counting Japan stats as legit. And you can't do that and stuff. Thus goes the debate cycle.

Look, I don't look at Ichiro's 4,000 hit the same way I would Rose's and Cobb's accomplishments. Quite frankly, I fall onto the side that doesn't recognize the stats from Japan. However, when it comes to Ichiro, there is always a big part of me that loves to romanticize about the idea of what Ichiro's final MLB numbers would have been if he indeed came to the U.S. earlier.


Instead of arguing of legitimacy, I like to look at the feat (is that still too strong of a description?) as a celebration of what Ichiro really has brought to the game of baseball. He's not in the conversation much, but he is one of the best ball players of all-time. Yes, I just said that. And as stated in a previous Pondering 10 list (Current Must Watch Athletes), Ichiro has been one of my favorite athletes to watch.

Feats such as ten straight years of 200+ hits and breaking and currently holding the record for most hits in a season at 262 are just the beginning. The arm. The Speed. The flare. The swing. The cultural influence. Heck, how many players in the history of baseball are known by one name? How many players have their first name on their jersey?

So yes, Ichiro's 4,000 is a bit of an exaggeration and somewhat of a nice marketing ploy of the New York Yankees. But even with all of that said, there is still a small part of me that wants to say, "C'mon! 4,000 hits is 4,000 hits." But the realist in me likely responds with, " but it's not 4,000 hits." Confusing, I know. This is why I understand the argument.

However, the situation does open up a box of discussions regarding statistical purity? If we exclude Japan, should we also exclude the Negro Leagues? And why? And if we do, why are Ty Cobb, Babe Ruth, and others held in such high regard when the talent they faced weren't the absolute best either?

Whatever. Too deep of a discussion for right now.

Let's talk even playing field and true comparisons. I decided to compare Ichiro and Pete Rose on an even plane between the ages of 27 and 39 for the sake of this post, and for the baseball nerd in me. What you will find is actually quite shocking.

It's quite the interesting comparison to say the least.

Either way, when it comes down to it, Ichiro is a first ballot Hall of Famer, as well as a potential member of the 3,000 hit club. You know, the real 3,000 club.

But for me, the beauty of Ichiro is always wondering, "What if..." What if he started his career here in the states, what would his true numbers look like?