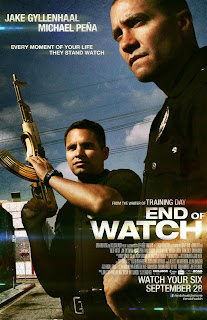 A documentary-style shot journey of two cops who are friends, and the encounters they come across as cops in South Central, Los Angeles, especially when they uncover a criminal force greater than they imagined.

Any scene with Brian and Mike going back and forth in dialogue in the patrol car.

Mike Zavala: My Grandmother said, "If you can live without her, then man-up and cut her off. Don't string her along."

End of Watch is a brilliant film. It really is. Some may not agree, but it takes a lot of creativity to shoot an entire film documentary style without making it seem hard to follow and without making the scenes feel redundant. The camera angles add a certain personality to the film that makes the relationships in the movie standout, especially that of Mike and Brian.

End of Watch is all about the developing relationship of Brian and Mike that hooks you. From the simple scenes of them in the patrol car that offers a certain realism of authentic bonding to them sharing their police duties, this film offers two characters and a relationship in which anyone who views this film will invest in. And without giving away a spoiler, the ending proves it.

Gylenhaal was phenomenal in this film. Absolutely, phenomenal. His work was highly reminiscent of Jarhead, which also was awesome stuff. Michael Pena was very funny, and of course, Anna Kendrick is in it too, which is easy on the eyes for the fellas.

All in all, End of Watch really surprised me and was much better than I thought it would be, and I expected it to be good. However, it was better than good. Any movie that can sell dialogue and in-depth characters with a real message and moral of respect you can take away from the film earns my respect.

Grab a DVD of this film and watch it.