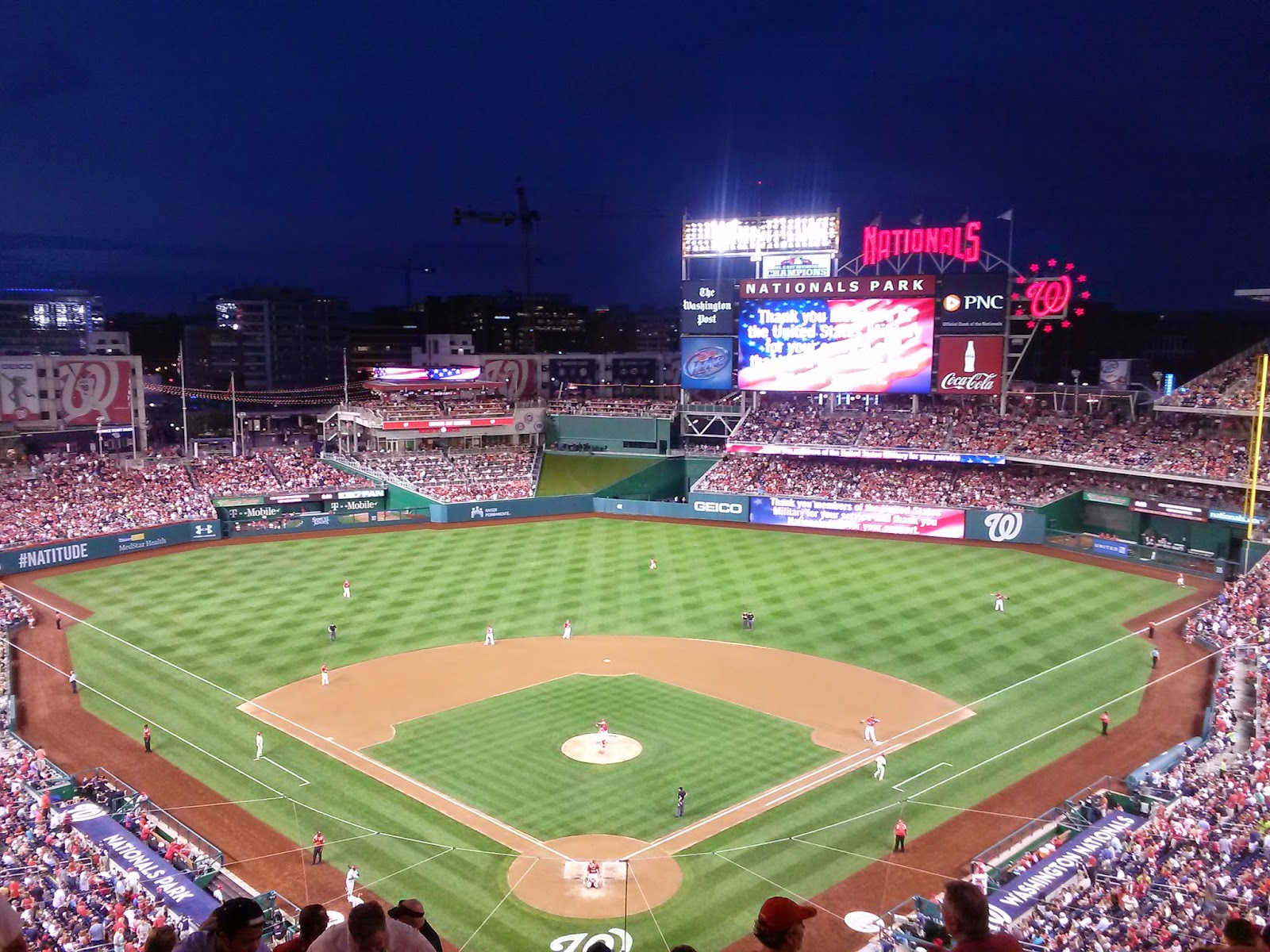 After our visit to Oriole Park at Camden Yards, the tag team partner and I hopped in the ride and immediately made our way down to Washington D.C. After staying an awesome hotel and spending the day visiting the monuments and chowing down at District Taco (which is absolutely phenomenal!), we took the Metro over to Nationals Park to enjoy the pre-game atmosphere around the park and of course, visit the home of the Washington Nationals.

Upon hopping on DC's subway line, you already get that feeling, you know, that feeling as Nats fans pile on the train as we all head to the ballpark. Luckily for us, the game featured the Nationals vs. the Phillies, and plenty of fightin' Phils' fans made the trip for the game which made for a fun atmosphere. And of course, you know Philadelphia fans, they brought all of their certain "charm" that comes with their fanhood as well.

[side blog: If only the Phillies could have stayed home and played someone else, we had plans to stop at Citizens Bank Park to catch another game. It's a favorite ballpark of ours.]


Upon approaching Nationals Park you will quickly notice it is in a remote part of DC. Actually, from what we were told, it's in an old Navy Yards section which no one wanted to be in before the stadium was built. However, much like we've seen in many places all over the country, a new sports facility can help revitalize a neighborhood and a city's economy.

Unlike Camden Yards, the area is currently under revitalization as it's easy to notice the new buildings which have gone up and aren't open as well as the old ones currently being torn down. With the Redskins looking to move back into the heart of DC, I wouldn't be surprised to see them wind up around this very area as well.

Nonetheless, Nationals Park is so easy to access. Not many drive to the park as you can simply walk or take the train, which is always nice for locals. As stated, we took the Metro in, and ultimately walked back, which was a twenty minute walk.

As for the stadium, Nationals park is nice. To be honest, nothing really stands out about the park. Most stadiums have their signature, and while the Nats don't, and that's fine, it does leave a certain void for a baseball fan.

Another quickie I noticed upon walking the concourse is the similarity in design between the New Yankee stadium and Nationals Park. Upon getting to my seat and a quick Wikipedia research, I learned both stadiums were done by the same architecture company - HOK Sports.

Despite the random quick thoughts, Nationals Park is rather nice as it is small, spacious, and really provides and atmosphere of enjoying the ballpark. There are tons of open space around the park which really invites patrons to get up and catch the game from elsewhere besides their seats. From the Red Porch and other open-air bars out in center field, to the many landing areas for standing room access, this really is the strong point of Nationals Park.

And to be honest, I'm usually a traditionalist when it comes to these things in stadiums, as I am of the sit-down-and-enjoy-the-product-on-the-field that Fenway Park and some of the older venues provide. However, the way Nationals park was developed and created, it does give the experience a certain freedom - pun not intended. Although, maybe that was the focus of the design. Who knows? Regardless, it is an interesting one, and from my experience, it seems to work as the bar areas and standing room areas were packed throughout the night.

Another aspect that lends to this specific experience is the extremely wide field level it has. I know I'm getting into stadium-geekiness here, and bear with me as I absolutely love this sort of stuff, after all, it's what I do for a living, but the bigger bowl does lend you to believe the Nats are looking for more of a multi-facilitated experience. It's almost as if they want those who purchased upper-deck seats to come down and enjoy themselves at these bars, or open spaces located on the lower levels. Again, an interesting structure to say the least.

Here are some photos I snapped walking around the building:


As for the fans, it was tough to gauge as the Nats pounded our old friend, AJ Burnett, for five runs in two innings before he was tossed by the home plate umpire among some other fireworks. The Nas continued the onslaught for six more and Nats fans were satisfied as Phillies fans came up with other vulgar ways to amuse themselves, or really, to hide the pain. Poor AJ, I'l always say this in his defense, his Game 2 win in the 2009 World Series is one of the most important pitching performances in the last tens years of Yankees Baseball. Just sayin'.

[side blog - again: We also drove past RFK Stadium on the way out, and it's very obvious why the Nationals needed a new stadium. I feel bad for DC United of the MLS to have to play there. Talk about an absolute dump! Why do our US Men's soccer team play there so frequently!]

All in all, I enjoyed Nationals Park. It's a tremendous stadium for locals and for their fans in the area. 12 bucks for a ticket to get into the stadium and enjoy many of the standing areas or bars which provide a great social scene and view of the game? The ability to walk home after the game? It's a steal for locals.

For baseball fans, I wouldn't rank it as high on the list as the Fenways and Oriole Parks of baseball, but I would definitely recommend catching a game there in the future. With the area continuing to develop, Nationals Park may have quite the surrounding very soon to add to the overall experience.