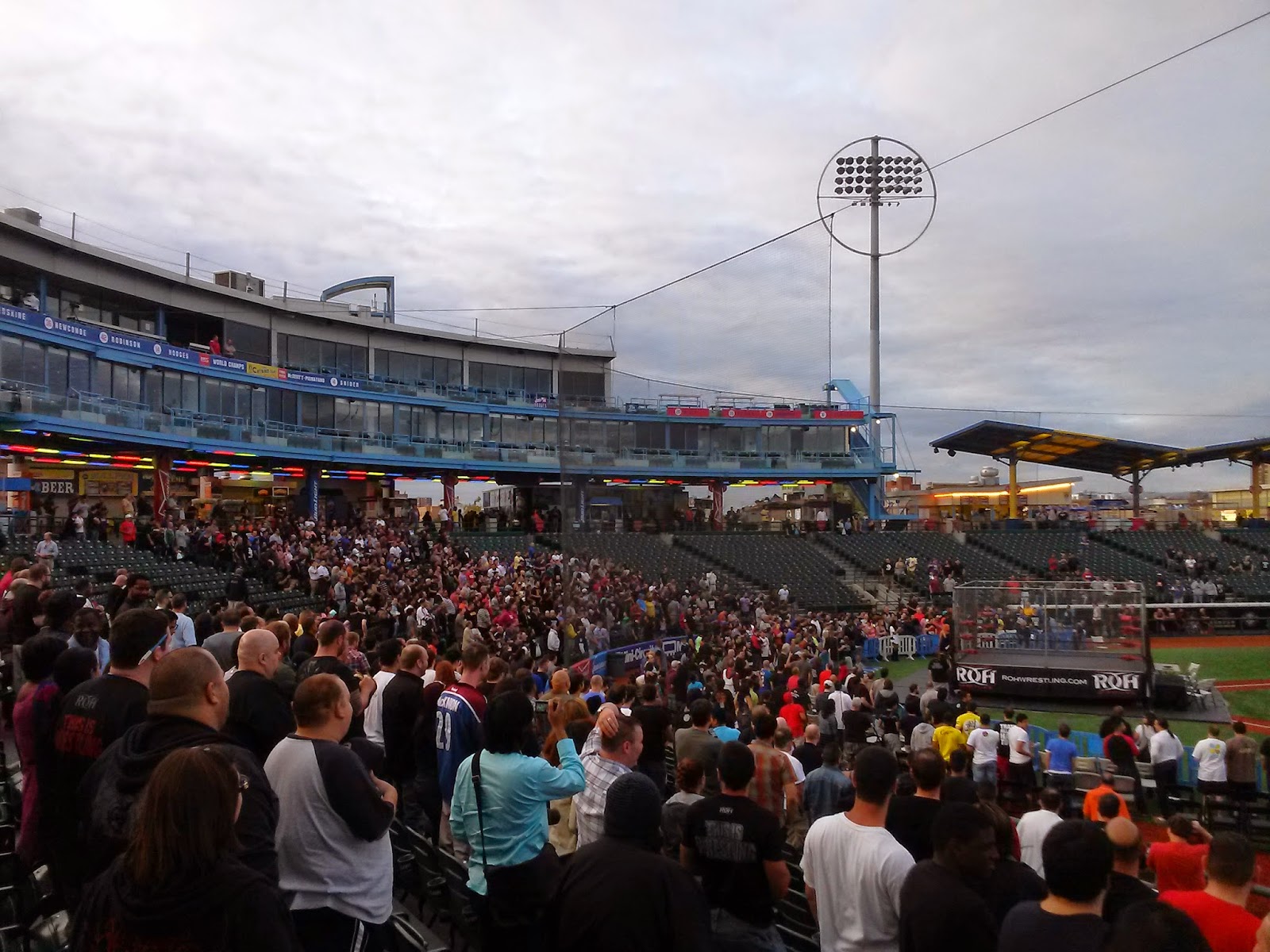 For a company that frequents New York City often, one would think it's somewhat rare that I've never attended a ROH Wrestling event. I've seen the product countless times and well, it caters to insane wrestling addicts like myself. You know, the fan that doesn't necessarily need the bells and whistles the major promotions offer. Just wrestling.

I came close to attending several times in the past, especially for Final Battle 2013 in the Hammerstein Ballroom, and again for the collaboration show with New Japan Pro Wrestling called, War of the Worlds, but never made it. So after ROH decided to pick up the ball in which TNA willingly tossed aside by hosting an event called "Field of Honor" at MCU Park here in Brooklyn, I figured, why not?

After all, TNA's events were tons of fun there, it's a Friday night, and I didn't have much on my agenda. Plus, there is something cool about wrestling events that are outdoors. Baseball and wrestling? Of course, I'm there.


After finding a parking spot and making my way over to the box office for a ticket, the immediate comparisons began between tonight's upcoming show and the previous TNA events of the year's past. I will say this, the set difference between ROH and TNA is quite obvious. Even in a simple set up for an outdoor venue. TNA had flood lights near the ring, speakers surrounding the ring, and an overall greater set-up than ROH's ring, table, and scaffold just in front of second base for recording purposes.

It was also interestng to see several non ROH fans in attendance who were seeing the product for the first time. It was noticeable as several fathers and sons were in attendance, possibly from the promotion of the event during Brooklyn Cyclones games. Good for them. I'm sure I'll be doing the same if I ever have boys of my own. Again, baseball and wresting...why not?

But for the most part, there were several fans, a few couples on dates, and other children who were learning the stars of ROH tonight. Would they remember or know who and what they saw the next morning, I'm not sure. Honestly, probably not. ROH doesn't build characters all that much or do the type of leg work necessary to cater beyond their niche audience (not one wrestler had an in-ring promo), but it did make me excited to see fans delving outside of just the WWE's product.

Nonetheless, I wanted the ROH experience, and I ceased the pro wrestling comparisons and analytics. I ws just looking to enjoy the show. And it was rather easy to do so as, (1) The show was really good, and (2) ROH fans, as super passionate as they are, quickly let you know this is their event - ROH's event. There were lots of ROH gear and chatter from many online, in the seats, and throughout the night.

And of course, ROH put on a show that emphasized what they do best, wrestling. The opening cage match between Matt Taven and Jay Lethal was fantastic. The four-corners main event between Jay Briscoe, AJ Styles, Adam Cole, and Michael Elgin was a superb match. It really had the entire stadium glued to the ring, and focused on the action - more on that later. In fact, this match really made me miss AJ Styles who seems very motivated since leaving TNA Wrestling.

Other than the break to remove the cage (which was too long), and the other break to allow the fireworks which commence every Friday night on the Coney Island boardwalk (which shows the difference as TNA always timed the event correctly to have matches go along with the fireworks), ROH really kept the matches flowing. One ended, and then the music for the next wrestler in the next match hit. If you're a fan of pro wrestling, it's an idea scenario.

Of course, there were  moments such as the entire stadium chanting "overrated seats" and alternating chants of "for-ty doll-ars" and "twen-ty-five doll-ars" towards the VIP section. Pretty hilarious moment. But at the same time, I felt very, very bad for ACH and Cedric Alexander who were doing some insanely athletic things in the ring.

Also, as they enjoyed the fireworks and prepped for the last two matches of the night, it was really cool to see some of the workers and talent play a game of catch on the field. Especially that of Steve Corino (in full uniform), ROH ring announcer, Bobby Cruise, who has quite the arm, and another ROH staffer who really threw it around the diamond. 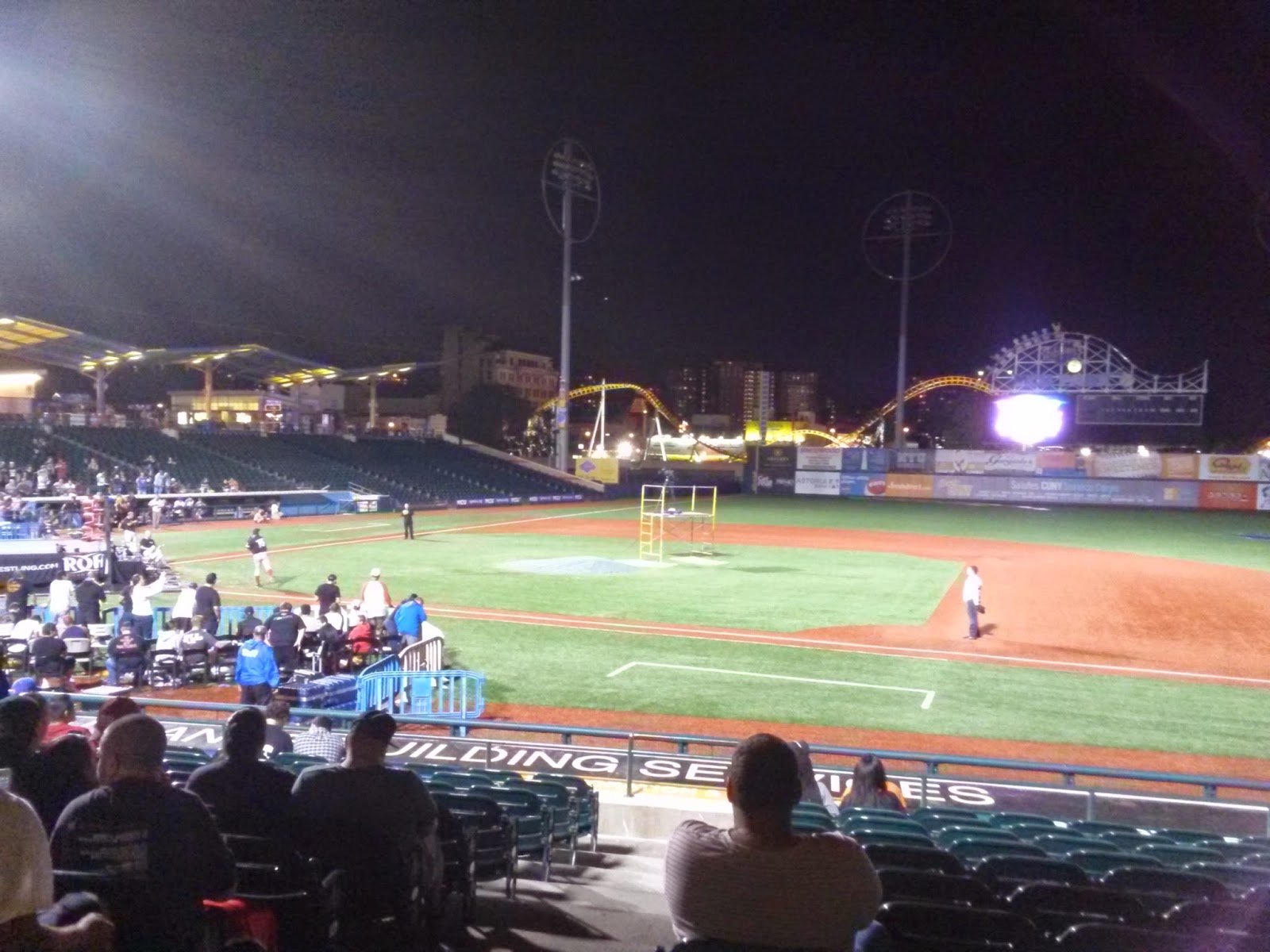 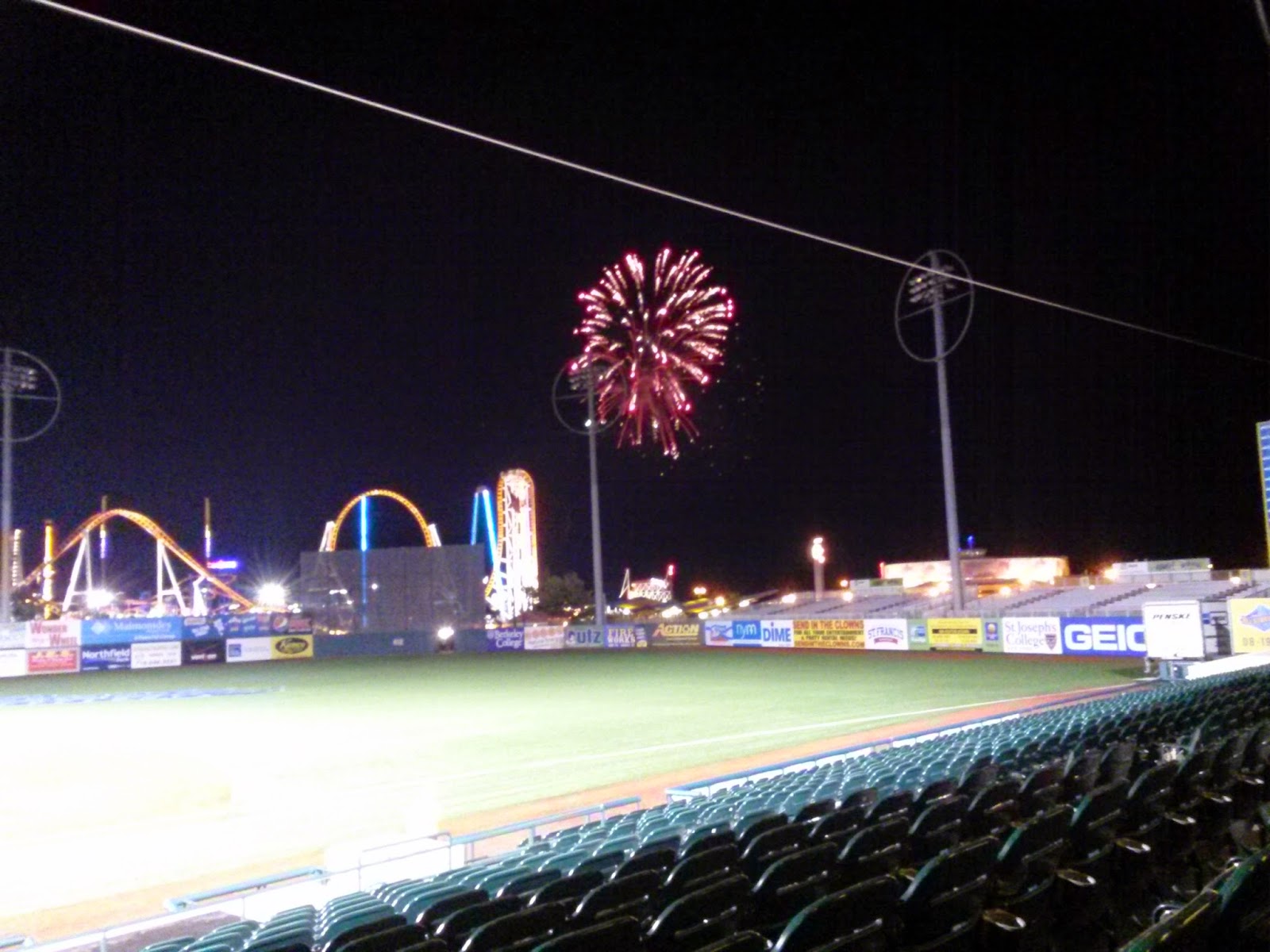 The only drawback tonight were some fans who chanted random sayings in order to make themselves the show rather than enjoying the product, or being part of the product. It was apparent throughout the night, more so behind home plate where the majority of the crowd sat. On a melo summer night, I sat up the first base line in a section where I was able to sprawl out over a couple of seats and enjoy the action, annoyance-free. I'm sure because of this, some may have different views and levels of enjoyment of this event.

Unfortunately, I don't think this is just an ROH issue, but just something wrestling fans in general are falling into recently as there were the same issues at the Live Raw I attended at the Barclays Center, as well as the TNA Tapings at the Manhattan Center.

All in all, I enjoyed my ROH experience. For the roughly 1,000 people that were in attendance, it was fun. Lots of wrestling. Lots of athleticism. A thorough product all around. I would love to do it again either this year for Final Battle 2014, or another time when they're in the city again.