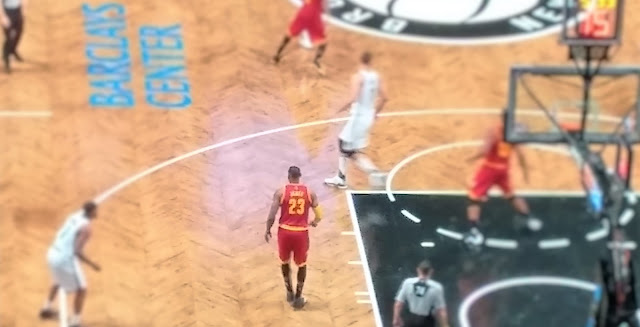 It was the brief exchange I had with a couple of Knicks fans as we briefly intersected one another's vicinity. After all, LeBron James is the type of athlete, the type of star, the type of talent that would draw anyone to watch him live against the Brooklyn Nets at the Barclays Center. Even fans of the crosstown Knicks - who by the way were playing across the river at the same time.

Regardless, again, we're talking about LeBron James here. And seeing him live was something I very much wanted to do at least once in my life. Especially, before age sets in and his super talents begin to knock him back down to earth. A thought that really feels very difficult to imagine will happen, and can happen.

Nonetheless, LeBron is worth the price of admission. Even to blow off watching your favorite team in the World's Most Famous Arena, or simply from the seat and comfort of your own couch. From his pre-game warm ups and dunks, to the moment your heart stops, your eyes widen, and your jaw drops as he breaks away for one of his signature tomahawk jams, it all is worth it.

And yes, those dunks, those spectacular so-awesome dunks? Yeah, he had three of them in the first quarter against the Nets putrid defense. It was thrilling. Absolutely, thrilling.

And then of course, there were the moments of him making passes that even live you didn't see on the court. The guy is tremendously special. Seeing LeBron live really adds an element of appreciation for his game that TV sometimes doesn't.

I'm glad I had that chance. And if you're a basketball fan, you should definitely seek that opportunity. It's not only worth it, but it'll definitely give you a whole new perspective on LeBron...one that you wouldn't understand until you do so.