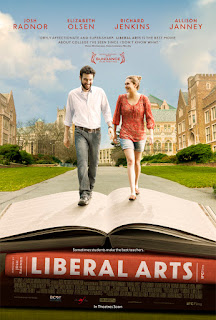 A thirty five year old alum returns to his college campus where he becomes conflicted with adulthood, growing up, and overall nostalgia when a powerful attraction occurs between him and a nineteen year old student.

After a rough day, Jesse runs into his random friend on the lawn of the campus who throws some zaney and wacky things his way which ultimately makes sense - thus letting him know that we shouldn't be afraid.

"Any place you don't leave is a prison."

Liberal Arts really took me by surprise. What started out as a film in which I thought would be a nice filler for the evening and carried on as such in the early going, steadily built into one of the most profound films on life, growth, and living I have ever seen. No hyperbole.

The film overall carries a nice thoughtful dictation of growing old, and realizing that no matter how old you become, or try to deny your age, we all have more growing to do, and that growth whether fearful or not, is essential. Yeah, I know...like I said, very, very profound stuff.

Josh Radnor did a remarkable job in writing, directing, and in the lead role. However, kudos to Elizabeth Olsen, yes, the younger sibling of the famous Olsen twins of Full House fame, who was a flat out ace in this film.

Personally, as someone who is around 18-21 year old individuals daily for a living on a college campus, this film was very, very relatable for me. Still, being objective, Liberal Arts is highly recommended for all, especially for the short hour and thirty-seven minute run time.