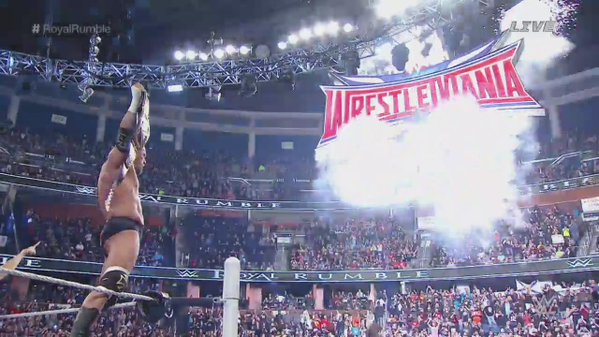 The Royal Rumble is easily one of my favorite wrestling events of the year, as I'm sure it is for many other wrestling fans. Coming into the event, I have to admit, I loved the story line in which Roman Reigns was defending the WWE World Heavyweight Championship in the Rumble. Reigns gets a hard time from fans, and they are trying (like reaaaaaaallly trying) to put him in situations as the likable protagonist, and this is one I think will work.

And by the way, if you dislike Reigns because his run came so soon or felt forced, then fine. I can understand that. But other than that, I'm not sure what the hate is all about. Just two years ago many had him pinpointed in the The Shield as being a star waiting to happen. Whatevs...

Anyhow, The Royal Rumble was an absolutely fantastic show from top to bottom. Really, I have zero complaints. None. Not even the one at the end of the night...yeah, that occurrence. I'll explain...but first here are some quick thoughts on the show:


- I say it time and time again, WWE's production is absolutely amazing. At this point even amazing doesn't do it justice. The set looks fantastic with the big screen, but there is a small part of me that misses when bigger shows have a distinct look and feel aesthetically. From the set, to the banners, to the aprons, to even the colors of the ropes. It's an very small tidbit, but just sharing...

- Starting the night off with Kevin Owens vs. Dean Ambrose was an absolute home run. The match was absolutely fantastic, and I loved the story it told. I just love when last man standing matches have that added element of an intense hatred that drives the match. It just adds a different element that others do not, and this one had that feel.

Dean Ambrose for some odd reason I feel is the "pace guy" who came out of the Shield. What does that mean? I know, sounds weird, but to me, he just feels like the guy who will steadily climb to the main event organically unlike the other two. He had that brief moment as champion (damn you Shaemus!) but, someday, he'll be there, and I feel it'll be under a gimmick that twists his "lunatic fringe" ordeal. Okay, I'm done. Enough weird premonitions and predictions.

- At some point, the WWE has to begin treating The New Day as faces, right? The Usos as always were solid, but just never got the correct response from the live crowd. To be honest, I too like the Usos, but the New Day are just so damn entertaining and charismatic, it's hard not to be into them.

Come on, the introduction of Francesca 2 was awesome.

Nonetheless, I am pretty curious where we go from here in the tag division?

- I really enjoyed the program between Kalisto and Alberto Del Rio leading into their match. Kudos to the announce team in getting over the lucha libre style and even the relevance of those who had those styles in the past. The Rey Mysterio comparisons should help Kalisto, as well as the win over Del Rio. Again, I love the focus on the different style, as it's usually not a "WWE" thing to do.

I'm not sure how many will admit this, or even feel the same way as I, but John Cena and his string of open challenge matches did wonders for the credibility of the US Title.

As for Del Rio, I was hoping for more since his return. The guy is a good wrestler, I'm just bored with the persona.

- I'm really looking forward to where the whole Divas division moves to now that Sasha Banks is in the middle of it all. The trio of interchanging and combination of matches and promos between Charlotte, Becky, and Sasha Banks can be quite good, especially if it ends with the debut of Bayley! You know, on the Raw after Wrestlemania!

Again, getting ahead of myself, and I'm really, really done on the predictions, but working the three of them around the championship should be fun.

I don't think Ric Flair will ever be NOT entertaining. Dude is such a clown. #RoyalRumble
— Dome Pondering (@DomePondering) January 25, 2016

- As for the Rumble, it was enjoyable. It won't break my top ten Royal Rumbles (which hasn't changed by the way) but it was entertaining. Again, as previously stated, the added element of the World Championship on the line was nice.

First things first, AJ Styles. I'll leave the whole TNA-negotiations dilemma out of this, but seeing AJ Styles in the WWE was weird. As a super fan of the guy (my third all-time favorite wrestler - look for that Pondering 10 soon!), I'm happy he'll get his due. I'm also part sad for TNA fans to see their guy miss another opportunity to return home. And I'll admit, there is a small part of me that gets frustrated with those "WWE-only" fans who now act as if AJ Styles is awesome only because he wrestles inside a WWE ring. Ah mean, he is awesome, actually phenomenal, but you know what I mean.

Regardless, I just hope AJ doesn't get lost in WWE-land. I've already seen some tweet about possible midcard titles feuds and other hopeful scenarios. Look, AJ Styles is main event caliber, period.  He was that in TNA. He was that in New Japan. Anything less, will be unfortunate.

Though, I'm throwing it out right now - Neville vs. AJ Styles needs to happen.

- I wasn't a fan of the disappearance of Reigns after the beat down. It just didn't feel believable. Why didn't they just toss him?

- If the Rumble made a star tonight, for me, it was Braun Strowman. After eliminating Kane, Big Show, and taking quite the force of reckoning from Brock Lesnar, Strowman looked like a monster. And the dude is massive. Never realized it until tonight when he went face-to-face with The Big Show.

- Also, one of my favorite things about the Royal Rumble, and this dates back to it's inception, are the simple moments like the faceoffs. When you get those two guys who have yet to cross paths suddenly stand chest to chest. Makes for the greatest of moments.

Orrrrrr.......that moment when a superstar sees a bitter enemy running down the aisle to the ring and that impending moment when they clash in the Rumble. Epic. Loved the Kevin Owens vs. Sami Zayn encounter. And the KO vs. Dean Ambrose re-encounter. And even the KO vs. AJ Styles slugfest. Kevin Owens is going to be busy and very intriguing over the next few weeks.

- And of course, finally, Triple H as World Champion. I still can't believe I just typed that statement.

I've always enjoyed Triple H's work. The dude is passionate about the business and industry. f course, he gets a bad wrap for his personal life - we all know the ties. But there was something eerie about Triple H winning the Royal Rumble and Peyton Manning in the Super Bowl on the same Sunday. Like some weird nostalgia going on. Is this 2006? And where is TNA's Bram to vouch for this?

Nonetheless, I enjoyed the surprise win. I really did. Unfortunately, once Roman and Sheamus were eliminated, I never for a second bought Dean winning. Again, PACE GUY! Despite that, the entrance and the win was still shocking to me.

If this leads to Trips vs. Roman at Wrestlemania, I'm not overly excited. I'll have to be sold on that. Regardless, the situation is so old, it feels somewhat new, and I'll take a wait and see approach to how this all plays out. I feel like there can be some serious playing up of his internet perception into the character of being CEO and the champion of the company.

Regardless, WWE flexed some pretty serious muscles tonight in terms of the depth of their roster (think about those NOT in the show). That aspect really came through in an awesome undercard.

However, and most important, heading into Wrestlemania season, WWE has so many options and possibilities with so many happenings tonight, it all feels intriguing. Again, a very, very good show tonight, and a great start towards Wrestlemania 32.

November 21, 2021
3 Up 1. COVID Boosters - Look, I'm not getting into vaccinations and whatnot...I'm over the discussion for 2021. However, I still find it remarkable that we not only have vaccinations for what we experienced not too long ago, but further science to help the cause.  2. MLB Covers Minors Housing - This was a long time coming. Say what you want about the changes to the minor leagues (reduction of franchises - some even closing), but the improvement of the pipeline is soooooooooo crucial if the sport is serious about improving its diversity and inclusion efforts, as well as attracting (and competing for) top talent. Plus, it's just the right thing to do.
Read more

November 28, 2021
The season is upon us we all begin to reflect on the year, explore our deepest thoughts and feelings of gratitude, and express appreciation for the truer, more meaningful things in life.  I would be lying if I didn't admit that I am so incredibly excited for this holiday season. The combination of wanting the rest from what has been a demanding and exhausting semester (shout out to everyone in Student Affair realms and in Education around the country - hang in there), seeing these holidays through my son's eyes as he now understands and appreciates them, and my experiences over the last few years (losing my dad and the effects of the pandemic), all of it makes for an anticipated Holiday season - Thanksgiving included. I'm not quite sure what it is, or why the sudden feeling, but the need to express gratitude is even more abundant this year in my heart than it is has been. I have tried to remain more mindful over the last couple of months - being more present, spending energ
Read more

November 29, 2021
3 Up 1. Thanksgiving - A time for thanks, if nothing else, a restorative time away from work. Happy Thanksgiving to all, and be sure to give thanks and practice expressing gratitude.  Here are some quick thanks and thoughts from yours truly... 2. McMichael Trial Conviction - Is it weird that I feel relieved from this trial? Afterall, so many of these things go the other way. I could go on about how the state of Georgia didn't want to prosecute this case until it became a viral discussion, butttttttt, I'll just take this.  Really, I just hope this brings about some kind of peace for the parents of Ahmaud Arbery.
Read more
Tweets by @DomePondering