Thoughts on the 2016 Baseball Hall of Fame Ballot 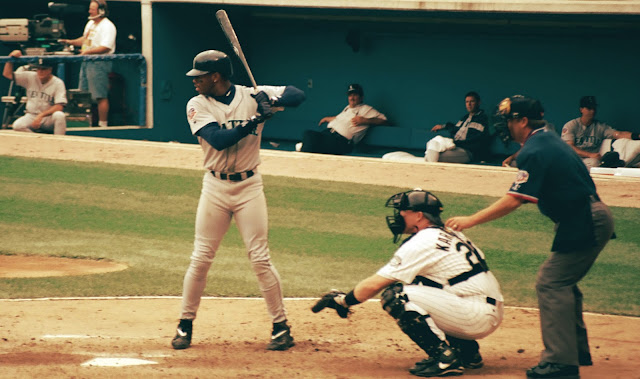 The 2016 MLB Hall of Fame induction ceremony this year will be highly anticipated by every baseball fan who grew up in the 90's. The selection of Ken Griffey Jr. and Mike Piazza feels well deserved, nostalgic, and honestly, an opportunity for the game of baseball to romanticize about some of the greatest - not just Hall of Famers, but GREATEST - players to have ever put on a baseball uniform.

Sometimes I wished the induction ceremonies were part of the All-Star festivities and not just a random week in the summer. I want a huge spectacle out of this! But whatevs.

Regardless, as I've stated in the past, the shunning of Piazza was rather ridiculous, especially when t was based on speculation, or anticipated speculation, right Bill Madden? But I still respect Madden for disclosing and explaining his vote. That's all one can ask for.


As for Griffey, the dude was so boss. From the swing, the athleticism, the power, the smile, the backwards hat, the sneakers, the whole entire package and swag was transcending in a sport where all of it is not easy to do. That sort of marketing stuff only comes easy to basketball players. And oh yeah, he did it in Seattle!

Here are some other quick tidbits from the Hall of Fame announcement:

Call me crazy, but shouldn't Griffey's swing also be inducted into the Hall of Fame? Quite frankly, it may just make the DP Page of Fame this summer, and don't be surprised if it does. I love that swing. Still do. No one had a sweeter swing than Griff. Ever. Really, ever. No one.

The last few years I've complained about the always anticipated but never shocking situation of "who didn't vote for (fill in the blank). I can do that with Griffey here, as three knuckleheads apparently looked at Griffey's career and just didn't think it was worthy of Cooperstown enshrinement. Maybe they compared him to his videogame counterpart where he ALWAYS went yard on the N64. That's a tough comparison, and I can see that reasoning a little bit.

Seriously though, 99.3% is the highest vote ever. Griffey deserves it. And yes, I do see Rivera and Jeter both smashing that record in a few years. But then again, there is always that guy, right?

All you have to do is see that Jason Kendall, Garrett Anderson, and Mike Sweeney received votes. Ugh.

Speaking of 2017, I'm sure Tim Raines squeaks in on his final year of eligibility on the ballot. Rock has waited long enough.

I wouldn't also be surprised if Trevor Hoffman somehow joins them as well.

Mike Mussina is one of my favorite pitchers of all-time. Looking at his numbers, it's borderline criminal how overshadowed he's been in this process.

Speaking of being overlooked, am I the only one who believes Gary Sheffield is a certified and legit Hall of Fame contender? Not saying he's first ballot, or even a sure thing, but the guy has a legit argument when you consider his numbers (against others), the various positions he has played, and the amount of big moments he has produced in.

Plus the stance with the super bat waggle was fantastic.

Are We All Clear On When to Vote?

Barry has to eventually get in, right? This is all pretty much punishing him by making him wait, no? Seriously, it has to be, yeah? Come on guys, we are eventually electing Barry Bonds, right?

Let's just make sure we do it together. Wait, we are still doing that? That is still the plan, correct?

Sammy Sosa received just 7% and may see his fate come to an end on the ballot in 2016. Just do me a favor and glance at Sosa's lines. I can't even wrap my mind around some of those numbers.

[sidenote: Baseball Reference is practically my mental home away from reality. I find myself looking at the most random statistics on there whenever my mind drifts. Hmmm, what did Clay Bellinger hit in 2000? That sort of thing. Not healthy at all.]

Sadly, a part of me believes future generations to come will be just as confused as I am by Sosa's stat lines and what his legacy really is - more baffling is that I actually saw him play and haven't the faintest clue. Good luck future baseball fans!

Finally, in what has become tradition here at the DP, and since I thoroughly believe every voter should disclose their votes, I will give you the official DP Hall of Fame ballot if I had one:

Because we're all done punishing Bonds and Clemens and voting for real on them next year, right guys? Or is it the year afterwards? Or shoot, did I miss the memo on them for this year? Crap.