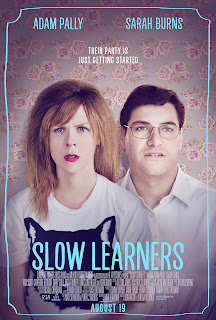 Two nerdy teachers decided to spend their summer attempting to be the "cool" people others don't think they are.

During a routine book club, Jeff and his friends invite their neighbor, who is pretty cool. Jeff then realizes and believes he can be cool too.

"You're like a doughy big baby. Look at you."

There really isn't much to this film. Slow Learners is a film with your standard plot of the protagonist wanting to be something else before realizing being yourself is the best thing you can be. However, what sells Slow Learners as an interest is the humor that accompanies it. The film carries plenty of one-liners, dialogue, facial expressions, and scenes that are hilarious.

The biggest sell is of course Adam Pally and Sarah Burns who have great chemistry in their characters and portray the nerdiness and awkwardness of Jeff and Anne very well.

Again, this film isn't going to blow you away, but it's worth a decent investment of the hour and thirty-six minute run time.