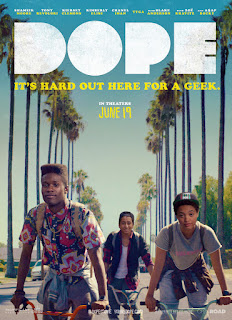 Malcolm, a geeky high schooler, has his life changed at a party in the rough neighborhood of Inglewood, California.

After realizing there was drugs in his backpack, Malcolm runs toward the band room with his friends and freaks out.

"All I know about drugs is that Jeezy is paying LeBron, and Jay is paying Dwyane Wade!"

Dope is a film that I'm very much torn on. For every moment I enjoyed the film, there was a moment in which I shook my head in disgust. Why? Well, simply put, the film does a great job of having a storyline arc that relates to any inner city kid with a goofy enough feel that mirrors House Party, another classic. However, it also does a very poor job in depicting the black youth and assuming every child has to sling drugs or hold a gun to make it out of the hood.

Focusing on the good, Dope is very funny in certain moments, especially when it comes to the wacky and zany adventure that Malcolm experiences following the party. The characters of the three kids are dynamic enough that they each compliment the overlying story.

Also, the soundtrack is absolutely awesome. From the 90's hip hop tracks to the original tracks from the band, you'll definitely bop your head many times.

As for the bad, there are some moments that certainly feel eye rolling, unnecessary, or just flat out stupid. Without giving away the plot, there is also a twist that is downright dumb.

All in all, Dope is still worth the watch in this interesting coming of age film. Don't expect something in the art form of Boyz N the Hood, but Dope does have it's moments, including a very powerful moment towards the end of the film.

With that said, Dope is still worth the watch for you to form your own opinion.