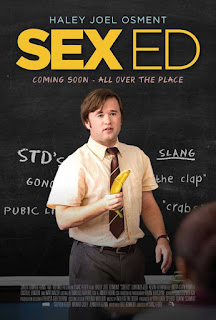 Desperate for a job, Ed stumbles into an afterschool coordination job that eventually leads him into teaching sex education for middle-school students despite the fact that he is a virgin.

After Pilar finally makes a move on Ed, he turns it down as he not just values sex, but the way in which it should be used.

"Stop looking at life like a series of checklists."

"Manhood isn't all wanting a woman and not getting her, it's having a woman, and knowing, you don't feel the madness"

I picked this one off of Netflix, and from the description, I have to say, I expected something along the likes of 40 Year Old Virgin. While it shared some comparisons, Sex Ed is actually a nice little comedy that takes the topic of sex and handles it in a more practical way, especially when it comes to youth.

The film has it's raunchy moments, and of course, I always shiver when underage children are asked to swear or say graphic things in a film for a laugh (I just don't think it's needed), but other than that, Sex Ed presents the topic of sex as more of a treasure than an end in which we see from most films. There is the underlying and surprising message in the film of what makes a man, a man, and how sex doesn't define that.

Of course, the biggest takeaway from the film is that Haley Joel Osment is still alive, and yes, is still a very, very, good actor. He easily carries this film and it's worth the watch.

All in all, this film is alright. Perfect for a good Netflix watch. Nothing more, nothing less.