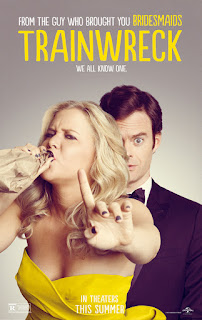 After believing that monogamy  was never possible, a career-driven women who willingly drives her commitment-phobia falls deals with her fears when she meets a good guy.

Aaron has lunch with one of his client, LeBron James, who cares about him but at the same time is super frugal about spending and picking up the lunch check.

Wow. Well, to quote the obvious line I've seen from so many reviews on this film, "Trainwreck, is exactly that...a trainwreck!" And to be honest, that might not be descriptive enough. This film was one of the worst films I've seen in a long, long time. It really was.

I decided to watch the film with my wife, and what I ended up seeing (and really forcing myself through) was poignantly put by her when she said, "it tried way too hard, in moment when you needed it, it didn't try at all".

Trainwreck was the typical Judd Apatow directed film with raunchy humor to support a love story of some sorts. Trainwreck followed the same formula, except the writing (written by Amy Schumer) was so poor, the characters were awful and the storytelling left you confused and at times checking out.

At the root of the film, it should be a romantic story and quite frankly, you don't even care midway through the film if Amy and Aaron ever get together. Especially, since the film hits a hard wall around the 45 minute mark that makes the final hour and fifteen minutes feel like a week. The film just drags, drags, drags, with pointless and unfunny joke after the other during other pointless and ridiculous scenes.

Oddly enough, the acting wasn't terrible. Amy Schumer was actually good, but for some reason, LeBron James, who was good as well, was the memorable performance from the film.

Unfortunately, for a film with such a large budget and such potential because of the cameos and appearances of celebs and athletes, this film falls flat. And falls so hard. The loud thud can be heard among the silence and mundane engagement as you suffer through this film. Trainwreck is again, one of the worst films I've seen in the last year. Watch at your own risk!