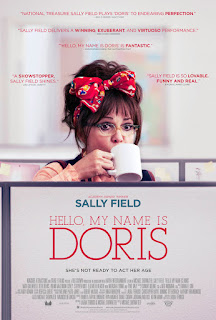 A woman unafraid to give up her past and demons, is inspired by a self-help seminar to pursue a younger man.

Upon learning about John’s favorite band, Doris buys tickets to a concert and suddenly meets others and has a good time.

“I’m a teacher at a gay pre-school”

Hell My Name is Doris is one of those films thatreally end up being better than you expected. When reading the description and of course, seeing the trailer, if feels like another one of those movies, you know, the one that sends the message regarding ageism.

Well, this one does too, but it does so in an interesting, weird, and quirky way. Behind the classic “you’re only as old as you make yourself” message, is one about letting go of the past, moving on, and no being afraid to constantly put yourself out there.

Sally Field was terrific in role. The character of Doris is one that we all have in our lives – co-worker, neighbor, or the other. Yet, her interactions opposed from John, played by Max Greenfield (Whom I have a tough time separating from Schmitt on FOX’s New Girl) were believable, and very much adds to the enjoyment of the film.

This film won’t blow you away, but it is a nice little film, of course, with a added little message or two.