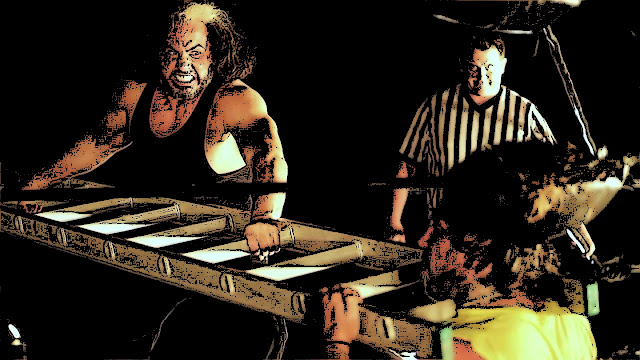 I really have no idea what I watched last night. Every bit of the match billed as the "Final Deletion" left me with an overwhelming roller coaster of emotions. Really, I laughed a lot. I was also befuddled. I was confused. I was embarrassed. I was appalled. I was shocked. I was excited. I was entertained. I was ultimately left wondering what just happened? And most importantly, where do we go from here? Whatever your opinion is of it, it hit every aspect most screenwriters want from their product.

The bit really isn't for everyone. And I'll be honest, I'm not sure I want to see things like this on the weekly product. It'll be difficult to try to digest mat classic in the same product spectrum of Jeff Hardy chasing talking drones on a dirt bike. But, I do like the mix and variety it gives the product. And yeah, I can't believe I just typed "chasing drones" in regards to pro wrestling. Can you imagine what Gorilla Monsoon's call for such a segment? I'm sure Lou Thesz is still rolling.

Nonetheless, the entire ordeal was fresh. It was so different. And that is something pro wrestling desperately needs these days. When the industry leader continues to produce television that - again, my opinion - is stale, formulaic, and allows it's audience to miss it without consequence, it paints a large brush on the entire business. Gladly, stunts like last night's helps to differentiate other products from the WWE, which is desperately needed for everyone.

There really is enough room in the pool for pro wrestling to provide one-hour championship draw spectaculars, or a segment where a brother blocks an onslaught of shooting fireworks from his opponent with a nearby metal boat.

For what it was, this was nice. It got the job done in attracting many, drumming up social media interest, and giving us all something new to discuss. Especially on the social media front, which has done so much damage to the image of TNA.

It's also been awhile on this front as well that pro wrestling fans have a topic that isn't so "smark-ish". I'm so sick of the tired pro wrestling debates on TV deals, free agent signings, and other happenings that aren't on-screen.

Credit has to go to the Hardy brothers on this entire angle. They easily could have just gone the easy rout with a boring "they-are-brothers-and-legendary-tag-team-partners-now-turned-bitter-enemies" feud, but instead went this route which was just awesome. I enjoyed every chapter of it from "Big Money" Matt to the evolution into the "Broken" Matt Hardy character, which is easily my favorite thing in pro wrestling in 2016. No, really, it is.

The character is downright hilarious. The wild distraught and crazed look is gold and the white stripe in the frizzy hair makes it perfect. The classical music is a nice touch. The overtly dumb accent is hilarious and causes me to add "OVAHH!" into my everyday lexicon. And who says things like, "I must delete you"? And ummmm yah, how about this week's goldmine statement of, "Prepare the battlefield for massacre!"?

Quite frankly, Matt Hardy has reinvented himself in the twilight of his career when many at this stage ride the wave of the prior success. So much props to him. Even more props to TNA Wrestling for giving him the platform to unleash this brilliance.

Oh by the way, I freakin' love Senor Benjamin. The dude is like Ralphus 2016! I hope they keep him around with the "Broken" Matt Hardy character. Again, another nice, entertaining touch to the character.

But while all of this Final Deletion hype and craziness is up for discussion and banter, really, what should be complimented is the entire TNA Wrestling product as a whole. Specifically the work of TNA creative (ever notice no one ever gives props to these guys when things are good?). It's been a long time since I've truly been this into the TNA product - like reeeeeaaallly into the product - the way I was prior to 2010.

The brand, in my opinion, is filled with so many interesting characters and meaningful developments each week, that I think it's the best wrestling product of 2016. I'll leave this comment at that.

Regardless, I've decided to save The Final Deletion on my DVR with the intent of watching it one more time. Maybe, two. Possibly, three. Even after several paragraphs of attempting to describe my feelings on watching it, I don't know if I've captured it. Because again, I don't think I have a clue what I just watched. The Final Deletion was something else, and maybe, just maybe, that's what makes it brilliant. Insanely brilliant.