The World is a Wreck 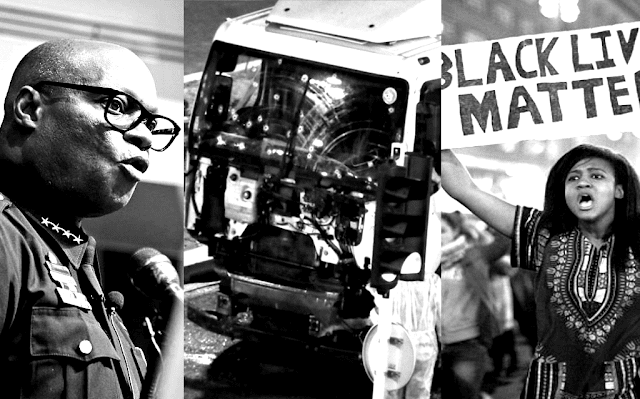 To say the world is fallen apart may seem like a stretch. But if you, like me, have attempted to digest the recent events across the globe this summer, a wreck, feels like reality.

For me personally, everything feels like a ton of bricks every time a new headline comes across my phone or my television screen with more injustice, more horror, more moments and issues of all-too-descriptive acronym of SMH.

It's a burden. I was in the middle of reading Michelle Alexander's, The New Jim Crow Law as well as diving deep into material, studies, and theories of a graduate Diversity class, as I chase another Master's Degree for nothing other than interest and self-actualization. I'll touch more on the second Master's at another time.

So with all of this new insight, plus my already foundational thoughts and feelings on certain issues, as well as the horror unfolding in our world, a lot of this feels heavy. Very heavy.


- The shootings in Orlando were horrific. A clear sign that discrimination against sexuality isn't over, but that a call and a focus on gun control was necessary. Somehow, as I posted not too long ago (Reaction to Orlando Shooting - When is Enough, Enough), I didn't have much faith that serious discussion would last.

- I remember watching the video of Alton Sterling at my desk at work and suddenly feeling gravely depressed and sad. Obviously for Sterling who had his life snuffed out for selling CD's and not even being armed, but because here we are in a country that still produces actions, thoughts, and laws very similar to Jim Crow.

- And of course, there is Philando Castile which is absolutely horrible. Diamond Reynolds might be the most courageous and poised woman that I know of. The video of watching an innocent black man die in another shooting caused rage and fear in my heart. Just days prior to both of these incidents, I too, was pulled over for yes, driving in a "suspicious looking car". The last time I had that happen to me? Two months prior for the same excuse. I know it's hard for White America to understand this, but the fear is real.

- I believe in the Black Lives Matter movement. I do. And while the media and many filled with overt racism or blinded by their own white privilege attempt to create deflecting spaces such as #All Lives Matter and #Blue Lives Matter to turn the movement into a battleground between law enforcement and minorities, the reality remains that equity in this country is far from a real thing.

Don't believe me? Ask anyone, regardless of race, whether they would willingly trade races to become a person of color in this country. If they say no, even in their silence to respond, they are aware of what is going on. Which of course leads me to this, why do they, the majority voice in this oppression system allow it to happen?

For me, the older I get, the more I understand and read about this country. With that comes the more I realize that outright racism that not only built this country, but still is enforced throughout the land.

By the way, for those hung up on my comments about BLM, the movement merely says and stands for black lives being realized in a society that functions in treating them - us - as less than equals. The movement never stated, ONLY Black Lives Matter. But that's the culture we live in...whatevs.

- The situation in Dallas, Texas further broke my heart. And adding to the storm was that the suspect was a black man -  you just knew things were about to get worse. It pains me to see that this is what it has come to in the constant crawl for equity. If we want to heed #BacktheBlue movements, then sure, let's do it. If this is the case, police officers need to get out in front of this issue. Adding to the fuel is the absolute refusal of good cops to call out those who are doing a bad job. Until then, we'll continue to hear more of these stories.

Nonetheless, my heart goes out to the families and loved ones of those officers. What a senseless tragedy, for little to no cause for us all, other than furthering the divide.

- Then, of course, Nice, France occurs in an attempt to remind us what terrible mindsets can truly do. The horrific scene of bodies scattered, and the imagining process of a truck plowing innocent people is a new low for humanity.

- Annnnnnnd now, Turkey and the militant coup. Not too long ago removed from the Istanbul bombings, an uprising in the country leave over a hundred dead.

- Of course, As I enjoy some brunch on this Sunday while punching the keys on this post, I read COPS GUNNED DOWN IN BATON ROUGE. Ugh... A loud, exhausting, and again, saddening...Ugh!

It's been quite a lot to digest as of late. For me, it feels like I am always trying to make sense in a world, that at times, feels like it's so far along in wickedness, that sensibility can't even be imagined.