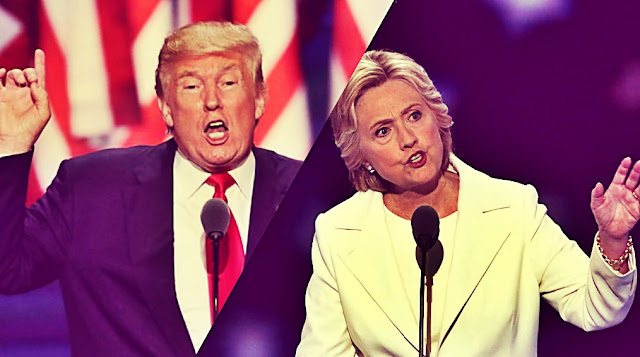 I'm going to try to toe the line on this one, as I can already feel a portion of you making your way through this post and having a slanted - based upon your viewpoint - political takeaway. But whatevs, so it goes.

First, for those new to these parts, I'm an independent. I don't really care for ties to political parties. As I always state, I punched a vote for President George W. Bush in my first ever opportunity to vote for a President, and then for President Obama twice.

Coming into this race, if you followed my banter on the primary debates (yes, I'm a huge debate geek), I found many of the choices to be a pick-your-poison deal rather than being excited about any one candidate. And once it was official that the main event would be Hillary Clinton vs. Donald Trump, I  found myself battling on a greater level and wrestling with the decision on where I plan to give my vote in November.

Thennnnnnnnnn, there was this past week...


As some do, I watched the Republican and Democratic convention and as many have claimed, it felt like two completely different messages on the outlook of America. Now look, I truly believe this election will come down to that very outlook for voters, whether you believe we are on the right track, or that we are in some pretty dark times. That's another discussion for another time and another post.

However, for me, Donald Trump's speech continues to stand out. As a person of color, I tweeted out my immediate thoughts, as well as shared with those I typically discuss politics and social justice affairs with, that I found his speech to be one of the worst speeches by a politician that I've ever heard. No hyperbole. I really was disgusted and insulted.

Yes, it was divisive. Yes, it baited, and aided in riling up a certain section of America who believe in his version of America.


I have never been appauled and more alienated by a speech than Trump's tonight. Lot of "them" "us" "inner cities" and "not in our country".
— Dome Pondering (@DomePondering) July 22, 2016

Even the meritocracy philosophy he implies upon children of color. Just cant believe this is where we are in 2016.
— Dome Pondering (@DomePondering) July 22, 2016

The speech filled me with a certain dislike for Donald Trump, that unlike many, I didn't have, or at the very least, I didn't find myself capable of having. Even worse, is the thought that many, typically white Americans in their own white privilege, are active and passionate about his message. About that same speech he gave over a week ago.

For me, it's a far cry from the laughing and entertainment I found watching from a Chicago hotel room last July when he announced his run.

Here I am no longer amused as we hit the stretch run prior to the debates. I'm not crazy about Hillary and I'm feeling like "anybody BUT Trump". In addition to that is what I felt was a very effective and persuasive Democratic National Convention. Dare I say, I found some validity in potentially voting for Hillary.

I'm still not 100% sold on where my vote lands in November. And of course, I will share that here on the DP when I make that decision. But I will say this for now, in a world where social justice and equity has become more socially conscience than ever before, I'm not shocked that a tag line such as "Make America Great Again" is a rallying cry for a campaign philosophy.

America still carries the demons of it's past. Take a look throughout history, it's never been overly great for everyone - all people - more so than today.