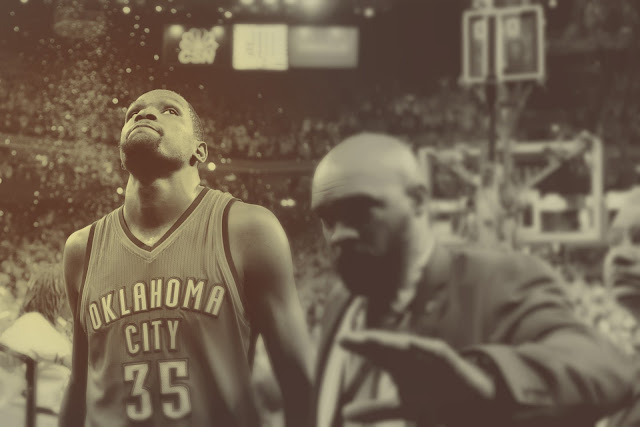 Look, I can't outright knock Kevin Durant for his choice - again, HIS choice - on joining the Golden State Warriors for the upcoming NBA season(s). As always, free agency is a choice for these guys, and it is completely up to them where they want to play, where they want their family to live, and what organization they feel is the best fit for those needs.

As a fan, yes I'm disappointed. It's the same feeling I had when LeBron James bolted for South Beach a few years ago. It was a sin that somehow, even with two championships, still hung over his head until it was all cleansed this past June when he did the improbable with a Cavalier championship. Part of me still can't believe that, even when I type it.

Regardless, there are levels of this move that really bumps it up a notch from what LeBron did in 2010. First and foremost, the most obvious, Durant is joining a team that just defeated him in the Western Conference Finals. And yes, he's joining a 73-9 team. Not a good look at all. Seriously, what's the goal for next season, 74 wins?! Crazy.


Second, the balance of power in the NBA didn't really shift, as we all know how good the Dubs are, but the power definitely now tilts heavily towards NoCal. It's great for the NBA to have such an attraction for ratings and attendance - I'm sure the League office ain't complaining! Yet, it leaves the same issue we saw this past season - is there any reason to watch the rest of the NBA? Especially in the playoffs?

Lastly, it continues the validity, extent, and questioning of the meaning of "competition" in today's NBA. When plenty of old school fans like myself miss the old days of when superstars weren't instantly crowned and they earned the status based on planting their flag and defeating other giants rather than joining powers like the Avengers, today's NBA misses and fails to embody that element. There was something there in that rivalry between Oklahoma City and the Warriors that was brewing and fun. That's now no more.

Now everybody wanna play for the heat and the Lakers? Let's go back to being competitive and going at these peoples!
— Kevin Durant (@KDTrey5) July 16, 2010

Again, I completely understand his right to choose. I also completely commend him for his article in the Players Tribune and acknowledging that he knows his decision will upset many. I just miss the old NBA - heck, in all of sports - when players sometimes despised those in the other uniforms as much as us fans do.

Durant will win a ring with Golden State. I believe that. Maybe he'll win two. Maybe three. Who knows? And I don't think we'll ever hold the championship(s) against him as the hyperbole claims in today's sports rants and soundbites. Quite frankly, championships are remembered as just that, championships. However, there is just no coming back from this. In my opinion, there is no return policy in this for Durant.

We'll see how the general basketball world adheres to him. And most importantly, how Oklahoma City, always a positive fanbase, reacts to it. By the way, the burning jersey stuff is so lame. Stop.

But, again, KD was a popular face for the league. And is still so for Nike. His marketing moving forward should be interesting. Especially when he is side-by-side with a guy many love in Steph Curry. An Under Armour guy, by the way.

Going forward, I'm afraid Durant now becomes the bearer of the black hat that was once LeBron's during his Miami days. Except for Durant, there is nothing for him in the option of a "return" or a situation in dire need to save or cement his "legacy". There is hardly a redemption option in this story. Today's sports climate is brutal, and such moves change everything. This move has one direction - moving onward and forward.

If Durant is okay with that, then I guess we'll have to be too. That's all there is. For this fan, it's the classic mom line, "I'm not mad, I'm just disappointed."