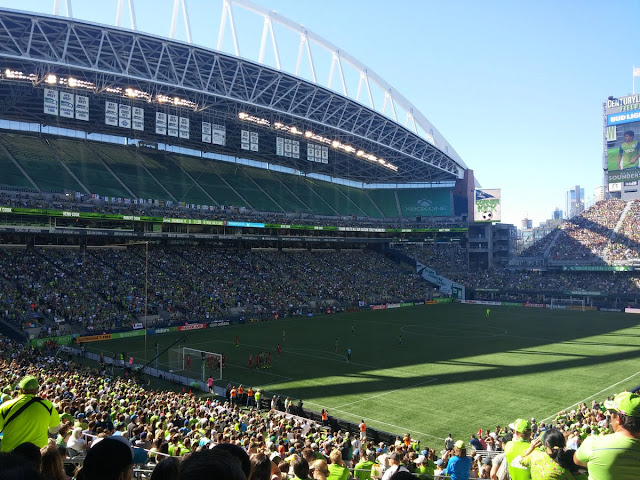 It's safe to say that the Pacific Northwest and their love for soccer is awesome. In many ways, it puts the fandom of the rest of the country to shame. Especially, when you hear from specific Americans that "soccer isn't a big deal". Psssssshh, again, come out to the Northwest.

After landing here in Seattle, I immediately showered, changed clothes, and headed down to Century Link Field for a life long bucket list of mine - attend a Seattle Sounders Game.

As a fan of the New Red Bulls, a fandom in it's own right which has a nice following, this didn't compare. Not even close. The city of Seattle and the Sounders are so intertwined, so a part of one another, that it's hard to even compare this type of atmosphere, civic pride, and fandom for other Major League Soccer teams, heck, maybe even teams within the "four major sports".

Everywhere are people in soccer jerseys. Bright green and blue is everywhere. Bars and restaurants around town each have signs and billboards advertising the game. It's a surreal atmosphere.

The official attendance was 39,491, and exhibited flashes of why CenturyLink is one of the loudest stadiums in sports. I can only imagine what Seahawks games are like when the attendance is doubled.

Regardless, nearly 40,000 fans, for a mediocre Sounders team this season, stood, chanted, cheered, and exuded passion throughout the game. As much as I am a fan of the Red Army back in Harrison, NJ, the Sounders supporter's section is one to marvel at. From a separate sound system, to chant which fill the stadium, to other songs which require participation from alternating sides of the building, it was just amazing to watch. As an outsider, sitting there, you completely felt out of the loop, and the more alienating it was, the cooler it became in a peculiar way.

All in all, I wish I could attend more games. I wish this level of fandom existed all over the country for such a beautiful game and a fan-friendly league.

All in all, I can now say I've been to a Seattle Sounders game. Someday, I'll make it to Portland to experience the Timbers Army.