Angel Stadium, much like Dodger Stadium, is from a different area. It's old, and shows the scars from the days when 60,000 multi-purpose stadiums were the rage. Yet, much like the stadium over in Los Angeles, Angel Stadium is beautifully renovated with the rocks, the big "A" and a picturesque outfield that makes it significant.


Oh yeah, although I've seen it before, the front of the stadium with the mini baseball field and the giant hats and bats is one of my favorites in baseball. 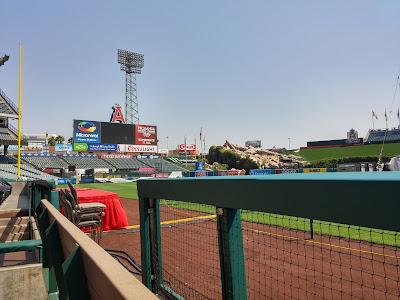 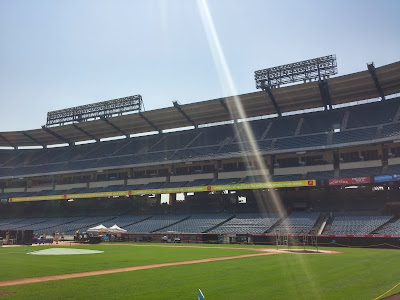 For me, what makes Angel Stadium the absolute coolest is what I feel are the best seats in baseball. Right behind home plate, the stadium has a box that is located under the stadium with a field sight line. I had an opportunity to see it, and quite frankly, no amount of words can do it justice.

All in all, Angel Stadium is very unique for a renovated, and much older stadium. There is something about the rocks and outfield that adds character to the entire stadium. Hopefully one day, I'll be able to catch a game to get the full game day experience.