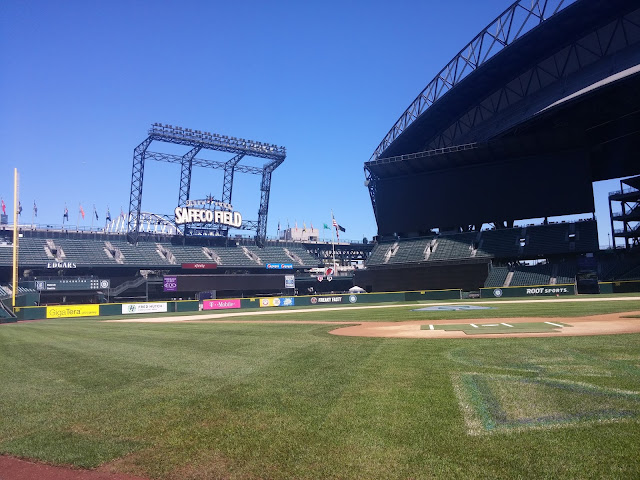 Continuing my Seattle adventure, you knew I couldn't visit a new city, especially one with a Major League Baseball team, and NOT go to the stadium! And, neither did my tag team partner. She knew exactly what was on the list to see in Seattle - Safeco Field.

Much to my annoyance, the Mariners weren't in town, but we did do the stadium tour which was just fantastic. Everyone in Seattle really is super nice in a weird chill way. And our tour guide was the same way, of course picking on my Yankee fandom as I rocked a sweet dad style Yankee hat in the home of the Mariners.

Of course, the tour begins where it all turned for better for the city of Seattle and the Mariners - the double. Now even before the tour, I explained to my wife the heartache a 10 year old me went through watching Jack McDowell give up a scorching line drive down the right field line to Edgar Martinez, and having to feel me heart bottom out second by second as Griffey ran galloped flew moved with some type of speed sorcery around the bases to score and send the M's to the 1995 American League Championship Series.

Ugh...it still bugs me a little.

Regardless, the play helped spur baseball fever, pushed the building of a new stadium (thank goodness the Kingdome is gone, ammirite, Yankee fans?), and ultimately, kept baseball in Seattle.

Nonetheless, besides the continuing jabs at the Yankees by the tour guide for all of the Mariners failures, Safeco is an awesome park. Nothing too aesthetically pleasing from the outside to be honest, but inside is just fantastic. From the architecture of the umbrella that covers the stadium (apparently they don't call it a retractable roof), to the way the stadium just represents all that is Seattle on the inside, it's quite a ballpark. 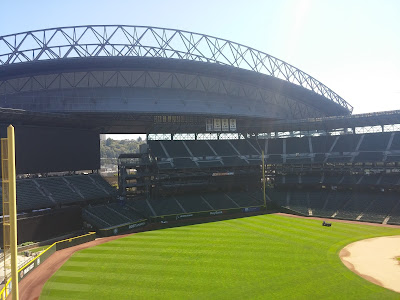 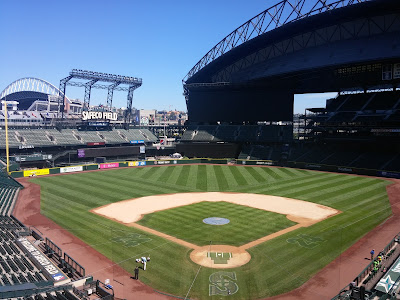 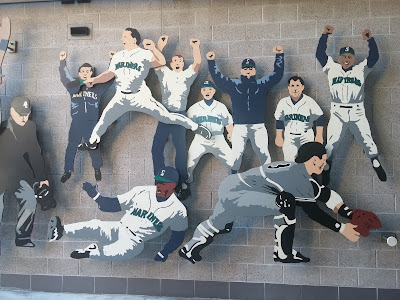 Oh yeah, the seats are quite awesome as well. Every where in the ballpark is a good seat. Always my biggest plus for a stadium.

Really, Safeco is a beautiful stadium. The short history of the franchise makes it very unique as you can see the things around the park that make the club who it is. Other than the rather boring look on the outside, Safeco has rich personality, big time city representation, and a great feel for fans.

Can't wait to return for a game in the future.