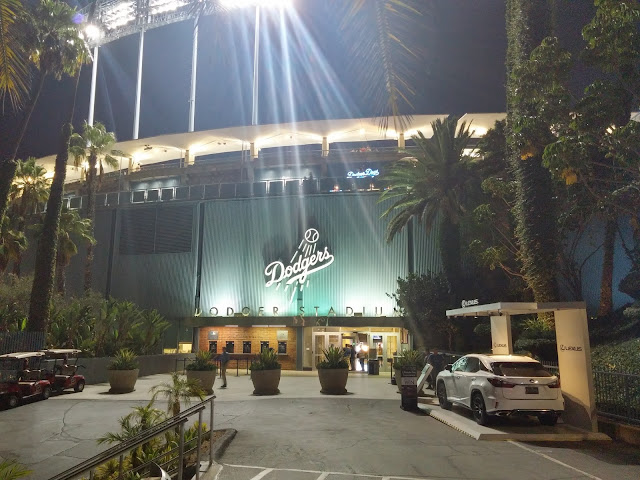 For the amount of Dodgers games I watch late at night during the summer, visiting Dodger Stadium almost feels like a must for me. In fact, in some odd way, I know wayyyyyyy too much about Dodger baseball. But whatevs...

Nonetheless, on my West Coast adventure, I visited Dodger Stadium for the second time, this being the first time inside the stadium. The first time, I walked around the ol' stadium that sits atop Chavez-Revine. This time, I attended a game, an important game for West Coast baseball fans - Dodgers vs. Giants.

The first thing you will notice about Dodger Stadium is that it has the biggest freakin parking lot for any baseball stadium I've ever been to. No seriously, EVER. But then again, this is Los Angeles we are talking about. The city where everyone drives by themselves.

The stadium itself sits atop this hill, and even the entrances are set up this way. In fact, because of it's dated existence, Dodger Stadium has that old structural setup that is rarely seen in modern parks, and this includes and upper deck that has a separate entrance. In some ways it's nice, in other ways, it completely segregates fans in sections, and doesn't allow you to roam the stadium freely. But hey, that's part of attempting to renovate an old stadium.

But because it's older, it has that old school charm. In some ways, Dodger Stadium reminds me of the old Yankee stadium. The structural shape, the classic feel, and the absence of in-stadium restaurants, and expansive otherness that we see in many stadiums today. 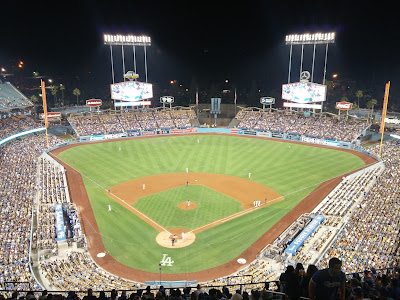 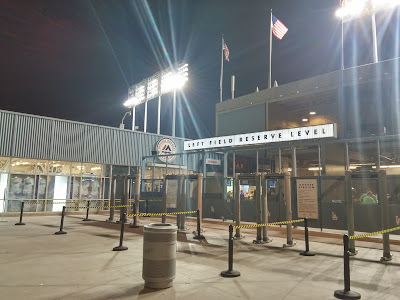 Adding to the old-charm is the size of the seats. Yes, Dodger Stadium has probably the smallest seats/rows I've sat in at a ballpark. It's definitely in the running with Fenway for being uncomfortable.

However, for all of the old school charm that still exists, the new ownership group has done a nice job in renovating the building with new LCD screens, expansive sight views, and a nice atmosphere with in-game entertainment. After all, it is LA, right.

Dodger Stadium is alright. As one of the oldest parks still standing, it's an appreciation for the die hard baseball fan.