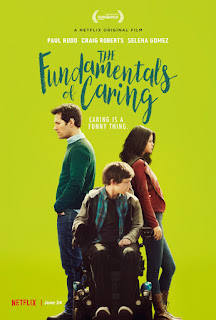 A man going through an incredible amount of loss takes on the care for a boy with physical disability. Their journey on a road trip helps both overcome their troubles and past, to see the world in a new perspective.

After Trevor is in capable of responding to Dot when she mentions his cool shoes, Ben begins to make fun of him for his handling of the situation.

I found this film on NetFlix, and as always, gave it a try. It was everything that I expected, and while that may sound almost uninspiring, it is not. The Fundamentals of Caring is a fun, quirky movie that is indeed inspiring and an easy watch.

The character are essentially what makes this film as we uncover more about the layers that make up the hard-edged Trevor and why Ben is in the situation that he is in. Dot and Peaches are also quirky characters who add to the entire plot, even sometimes, bringing out the best in Trevor and Ben.

Of course, like most indie films, this is a feel-good film about coming of age, making the most of life, and, journeys that inspire human development through our interaction with one another - no matter how brief. Yes, it's cliche, but it's the good type of cliche, that dare I say, the world need right now, especially in this political climate.

Also, Paul Rudd continues to show some enormous range in his talents, by being compassionate within the character Ben, but still being the hilarious guy we've come to know. Though, Selena Gomez steals the movie as Dot. Who knew that she was THIS good? She was absolutely perfect in her role.

All in all, this is a really good film worth the quick watch if you have some time on your hand.