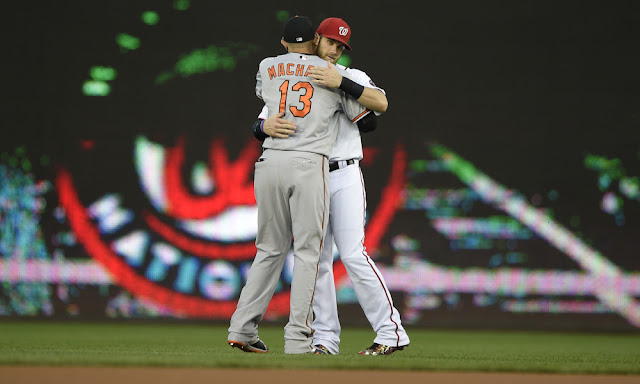 As we await the breaking news of what team Bryce Harper and Manny Machado (or Machado and Harper, however you have them ranked) will sign with, let's ponder my crazy thought and wish, if you will, for the current MLB off-season.

No, this is not a campaign for my Yankees to sign one of them. And for the record, Yankees fans need to chill - the moves made this off-season have been awesome.

And no, let's not talk labor discussions. Its very obvious front offices have possibly learned from the mistakes of the past on long-term deals for huge amounts of money. Though, it only takes one owner with radical thinking to put a wrinkle into it all (my wish includes this very GM!).

I'm talking something that is not necessarily unprecedented, but an occurrence that possible could give MLB the national attention it hasn't gotten in a long time, and really, placing the game of baseball on the front burner of main stream appeal.

What if Bryce Harper and Manny Machado signed TOGETHER with a club. Yes, in the same city.

Taking a page from the super team recruiting of the NBA, what if we simply watched these mega stars buck the system and decide to play together? Heck, what if they brought along a guy who has been frozen out from these labor talks for the second year in a row in Mike Moustakas?

In a perfect world, this is hard to see happening, especially since MLB doesn't have a salary cap. But damn it, in ripping yet another page of outright revenge from the pro wrestling manual and creating instant characters - of course, heels scorned by the system - this would be absolutely awesome.

Bryce Harper already is a guy that rubs many old-school fans the wrong way with his antics regarding "making baseball fun". And of course, we've seen the fallout in how many feel about Machado following the World Series and some of the dirty plays and lack of hustle displayed on the game's biggest stage. Again, natural heels.

I'm honestly begging the Chicago White Sox (or even the Philadelphia Phillies? Maybe?) to go out and pull this off.

In a really crazy world - San Diego Padres, go sign these guys and wreck havoc on the NL West.

After all, while the Yankees are obviously baseball's most hated team, and there are only a handful of teams around the league - right now, at most - that are truly entertaining, this gives baseball some high end drama, some swag, some major appeal, and really, another must-see team within a league of very bland squads at this moment.

Again, I know, this is very unlikely to happen. Really, more like no chance.

But there is just something about this opportunity to have baseball snatch a page out of the NBA's playbook, something in which so many complain about, yet, often reaps so much interest, drama, and emotion by having two of it's biggest stars publicly say, let's go do this together and make that franchise ours.

Machado and Harper hitting second and third (or third and fourth if you're a traditionalist) in the White Sox or Phillies lineups instantly make them nightly must-see on MLB Network's MLB Tonight Live "Drop-In" coverage. The intrigue just sparks baseball with a whole new fan base invigorated, and of course, a new dimension added to the game.

Again, it won't happen. This will only happen in a video game. And in my imagination, of course.

But it sure is nice to step away from the analytics, economics, and constant "smart" discussion of baseball and well, just wish and imagine for something in our beloved game.

Baseball desperately needs that fantasy feel that has become lost in all of the numbers, formulas, and debates.

From this Yankees baseball fan...give me Harper and Machado on the same team.

And damn it, give Mike Moustakas the respect he deserves.