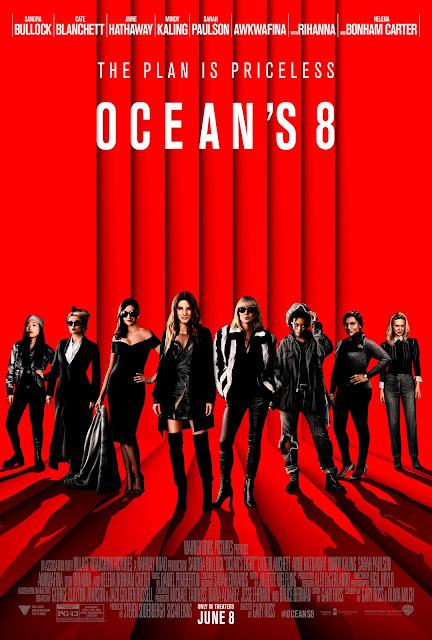 Danny Ocean's sister, Debbie, gathers an all-female crew to pull of a heist at the MET Gala in New York City.

After the necklace goes missing, John Frazier arrives on the scene to help find the necklace, and begins interrogating everyone.

"If you're going to have a problem with stealing, then you're not going to like the rest of this conversation."

I get why this film was made. I do. I really, really do. Ocean's Eleven was awesome. Twelve and Thirteen were well...alright at best. So yes, there was room to not only hit on the girl power while also raising the bar after the sequels damaged the franchise just a bit.

This was note it. In fact, for all of the star power, built in credibility from the original, and even a curve for the new all-female squad, Ocean's 8 fell flat. Like, a hard thud.

The film has a great premise, but someway along the apex of the film, we get twists and turns that feel out of nowhere, and thus, just leaving the viewer confused, the film a mess, and overall, a story that doesn't feel authentic.

This one will be on network television soon. Grab a look there on a night you're very, very bored. Other than that, you can remove this one from your "must-see" list.