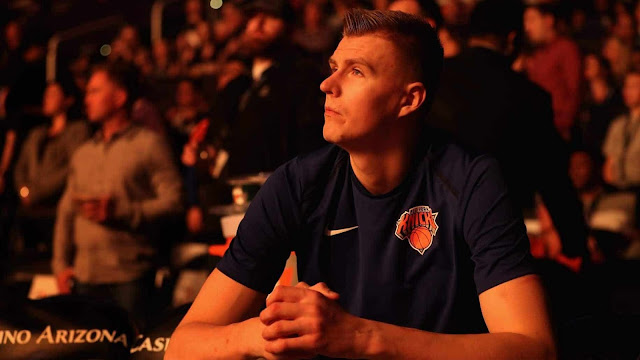 Here we go - the Knicks doing Knicks things to Knicks fans in in only the way the Knicks can.

I was at work when a twenty-two year old colleague of mine, who is typically quiet and reserved erupted in how I'm sure we all did when we heard the news.

Throwing his keys against his desk and leaning back in his chair, he said, "You've GOT to be kidding me?"

Shortly thereafter, the immediate emotions and thoughts he showed were easily the same among Knicks fans everywhere.

For me, Porzingis represented the one good thing that the Knicks have gotten right since...well, I can't even remember when that was.

For him, he continued his frustrated rant, "Porzingis was my favorite Knick of all-time. I didn't see Patrick Ewing or any of those guys...this was my guy."

After wrapping my mind around the idea that there is now a generation of Knicks fans who know nothing but losing, futile management, and being the punchline of jokes and memes, it added to the emotion of the trade and the wonderment of just how stupidly loyal this fanbase is.

But like all things in Knicks fandom, I've become so immune, calloused, and quite frankly, expecting of these things that I was able to sooner bring myself back to reality, and maybe...rationale on this entire thing.

Here are my quick thoughts on the Kristaps Porzingis trade:

SO KNICKS, BUT DIFFERENT?

Yes. This is the usual kind of stuff we've come to expect from the Knicks. And quite frankly, trusting anything that is under the Knick logo and banner is not good. Actually, it's a safe bet to jump to the conclusion that It'll be a bad decision. Or, whatever move was made, it won't work.

However, this IS a new regime in Scott Perry and Steve Mills that is doing a lot of clean up from the Phil Jackson era. In a weird way, this is soooooooo reminiscent of what Donnie Walsh had to do following the disaster that was Isiah Thomas. Again, Knicks fandom - just over and over again.

But with that said, Perry-Mills haven't made any bad decisions - or at least ones we really can call place in the "Knicks being Knicks" category since taking the helm. Often forgotten is that both got back way more for Carmelo Anthony than originally given credit for (and of course, made fun of for). They've drafted a worthwhile project, and also have resurrected a few careers in their time.

Time will tell on this trade (obviously), but the Knicks ARE sitting with $70M+ in cap space this summer, and get this? They have seven-first round picks in the next five years. Both of these are VERY un-Knick-like.

I'll say it too - Porzingis was my favorite Knick since well...Patrick Ewing. Maybe, Allan Houston?

But this trade did force me to examine just exactly why that was. Porzingis represented so much more to Knicks fans than just talent and potential. Porzingis' presence was hope.

He defined and carried every bit of hope every Knicks fan had that represented brighter, more consistent, days were ahead. So the immediate departure of him does hurt. It makes so much sense why the initial reaction was what it was.

Yet, if we remove the blue and orange lenses, it is fair to ask the question, "what exactly has Porzingis done?". I'm being VERY honest.

In only 186 games in four years, Porzingis and his camp were suddenly making demands with the kind of NBA equity veterans typically have. His equity, his stock, was non-existent (still is) and is based on nothing else but, again, hope. For a player returning from an ACL injury and a player in which the Knicks would inevitably have to make the decision of possibly offering a nine-figure deal if he remained in the organization - worth and future investment was a serious concern.

I might regret these words if he reaches his ceiling in Dallas (and yes, it's the Knicks fandom to expect this small percentage to actually happen against us), but really, these were the EXACT situations in the past in which got the Knicks themselves into salary cap hell. It was these type of investments which were built on caving to social pressure and fear of the what-if, rather than sound decisions to build and maintain culture and flexibility.

Honestly, I can't believe I'm saying this, but the Knicks may have made a quality decision here. Even if it does blow up in their face down the road.

Ultimately, how could they have made someone happy who didn't want to be part of the organization moving forward?

Of course, on his way out, Porzingis placed on his Instagram for Knicks fans to "stay woke."

First, let's not trivialize social justice matters with these kind of scenarios. And the phrase here is quite lame. Kristaps, just say what you want to say.


I would prefer Zingers just bash the Knicks on his way out. Go ahead, just do it! Get all it off your chest so we can quit the speculation and the mystery around it all.

But ultimately, this situation doesn't lend favorably to him. In fact, his likability in the eyes of Knicks fans has tanked, some completely turning on him. I'm sure you've already seen, read, or heard this across Knicks fandom.

Is this Porzingis turning heel? Possibly.

Even when Carmelo isn't around, he remains a topic. And damnit, he still remains one of the most fascinating athletes ever - for me at least.

After all, in the midst of all this Porzingis discussion, it comes to the surface that Melo always wanted New York. That, you have to give him. This sudden Porzingis drama somehow redirects the narrative of Carmelo's Knicks tenure just a touch. 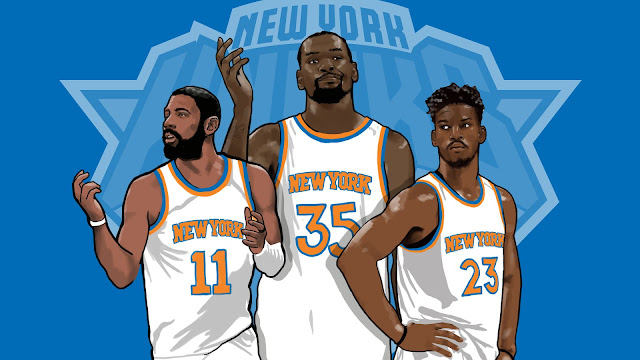 And of course, there is the other side of this deal.

Here is where my Knicks fandom sneaks in again, because historically, I have ZERO - NONE, ZILCH, NADA - faith in the Knicks doing anything significant with this cap space.

But before that? It was the summer of 1996 when the Knicks acquired Allan Houston, Larry Johnson, and Chris Childs. That was twenty-three years ago. TWENTY-THREE YEARS AGO!

Because really, that's what this trade is - trading hope for a large dream.

So yeah, I guess we'll see.