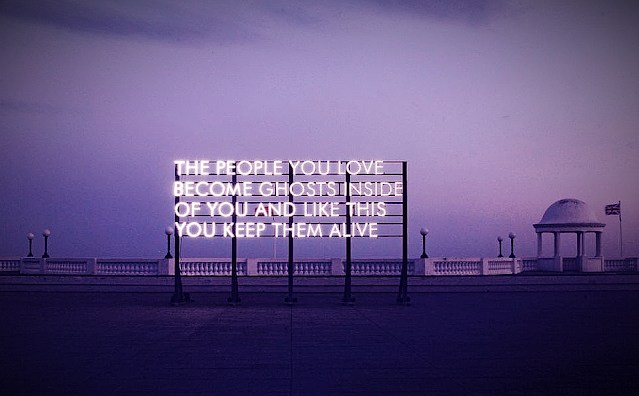 He curled up in my arms, laying there on my lap, then randomly uttered, "I wuv you." It's a moment like that where I continued to learn, at this stage, that's all I needed. And really, that's all I wanted.

I often write these birthday posts for myself as a reflection on where I am in life - a mere examination of what one year older feels like. For so long I've titled them as "What [enter age here] Means" or some other catchiness to match the age number (kind of like this post), and for many of those years, the thoughts and words that came to me reflected growth, external desires, and some sort of assessment of where my life currently was at each milestone.

Today, I decided to look back and read them, and of course, I find them interesting. Not wrong, embarrassing, or naive in any way - the posts do and did what they should - reflect where I was at that point in my life. Heck, the post reflecting on turning 27 back in 2012 (What Does 17 Mean?) is one of the most-read posts in the history of this small slice of the internet - viewed and read over 1300 times. Though, I could see how anyone would want to read and seek insight on others turning 27. Oddly, it's such a non-milestone age, while still being a mile-marker of importance.

Nonetheless, as I turn thirty-six today, I find myself many times mentally wrestling to grab the words and thought-theme on this thing called thirty-six. It snuck up on me because quite frankly, a global pandemic has changed the essence of time - for good and bad.

I found myself on that workout bench feeling blessed, humbled, tested, and earned.

It's been a tough last couple of years if you follow this blog called Dome Pondering. From my dealing with my father's dementia towards his eventual death, taking care of my mom, professionally pushing beyond what I ever dreamed, entering fatherhood, and now becoming a homeowner - my thirties have really felt like one hurdle after the other. All of them quickly approaching one after the other with no time to gather my feet.

I sat in my basement on my workout bench staring off at what surrounded me in between sets (of course, I purposefully line up deadlifts and cleans, my favorites, for my birthday). Here I was a Brooklyn kid with very little statistical chance for anything, with his own house, a wonderful wife (who planned a fun and thoughtful day out for my birthday), and an awesome son who is now able to express himself, and with that limited-expression, wanted to say that he loved me the day before.

It's kind of cheesy, but in that mode of thought, at that very moment, I was content. It wasn't a reflection on wherever I've been - because I'm always conscious of that and have done that in the past on my birthdays as well. No, this year just felt different. It felt more like a new chapter - a real new chapter - that starts with a new version of who I am.

So much of my identity of who I've always been has been removed or changed in my life. My father is no longer on this earth. Ditto for one of my best friends. I no longer call Brooklyn my place of residency - not even New York State. My job is even from a different scope from the one I've had - the one that was my career goal.

Things are just different. And because of all the things mentioned above - I'm also different. I very much know that I am.

I don't know how long my story is, but I do know that thirty-six definitely begins a new chapter.  One where I'm ironically more assure of myself than I've ever been while also discovering a new me and what that embodies without the people, places, things, and identities I no longer have.

But of course, there is the venturing new me that carries the ghosts of everything that are those identities with me going forward, and embracing the new ones, and the new responsibilities ahead.

I'm sooooooooo grateful to be here and very much looking forward to this new chapter.