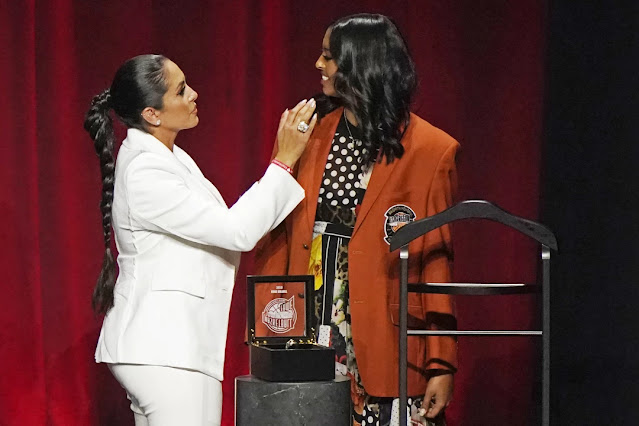 1. CDC Masks Mandates - One day we're going to look back on this time and wonder - why the heck were masks - face masks! - such a controversial thing?! Regardless, we got another very significant hurdle in this pandemic as the CDC announced this week that individuals who are vaccinated are no longer required to wear face masks going forward.

BTW - Watching the Bryant family induct Kobe Bryant was special. It's still so weird to think he's no longer with us.

3. J. Cole - It's rather remarkable to think about an individual dropping an album then chasing another dream of professional basketball by oh yeah - doing just that overseas. J. Cole had a helluva week by releasing The Offseason then making his debut for Patriots BC in the Basketball Africa League.

Just for the record - and to add to the growing conversation everywhere - I like The Off-Season. Still warming up to most of the album, but "Pride is the Devil" is easily my choice to bump in the car right now. Great song - and a very deep one.

1. Gaza Strip Turmoil - Utter sadness emanates from this region of the world as unrest has sparked once again. Even sadder is the amount of innocent lives being lost. Innocent children...ugh. So, so sad.

2. Arizona Voting Law - Unfortunately, G.O.P lawmakers' attack on voting continues due to unhappiness with the 2020 record voter turnout. The state of Arizona, signed by Governor Doug Ducey, will now remove people from the early voting list if they do not cast a ballot at least once every two years. My thoughts on these bills remain the same - I'm all for integrity to voting, however, these bills do nothing but attempt to remove voters. It's disgusting.

3. East Coast Gas Shortage - This one started last week and rolled into this one, overall the story is sorta crazy. A Cyberattack shut down 5,500 miles of pipeline causing so many gas shortages across the East Coast. Even crazier? Colonial Pipeline paid the hackers nearly $5M(!) for the ransom held. This sort of stuff is scary.

1. Russell Westbrook - Not only did Westbrook break the record for career-most triple-doubles (182), but he solidified his fourth - FOURTH! - season averaging a triple-double. As stated last week, this dude really is special.

1 Selfish Up For Me

1. Knicks in Playoffs(!) - My guys are not only in the playoffs, but they are in as the fourth seed! What a season this has been - too pumped for the playoffs!