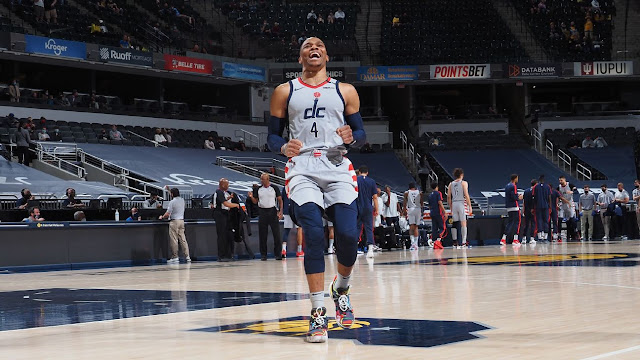 Mother's truly are incredible - I'm lucky now to witness my wife in it every day.

2. Russell Westbrook - Can we please stop hating on Westbrook? Enjoy the talent and what we are experiencing every time he plays. Triple-Doubles aren't easy - I'm so tired of that false narrative trying to become a thing in "evaluating" hoops. Westbrook is special. 181 career triple-doubles, tying Oscar Robertson, that's really cool.

3. MLB No-Hitters - Ditto on the no-hit discussion as just mentioned on triple-doubles. Just because we've seen quite a few no-hitters this year (and this week!) doesn't mean it's suddenly not special anymore. Yes, pitching has gotten better, but it's also so much tougher to do with the pitching philosophy of today and all of the limitations that come with it.

BTW - If not for a dropped third strike, John Means would have tossed a PERFECT GAME! Let's just celebrate it when we get it.

1. Florida Voting Bill - Well, if you thought Georgia and SB 202 was controversial, you had to know Florida would say, oh yeah, hold my beer! The Sunshine State has now passed SB90 with similar sanctions on voting measures as Georgia did. With many of the surface reasons leading the way, the bill carries underlying rules and policies that target specific voting demos - it's very unfortunate.

2. Coronavirus in India - India continues to struggle with an outbreak of the Coronavirus that very much looks like what flooded our television sets in April 2020. Hospitals continue to be placed under great stress, and death tolls have risen. As the world looks to transition into a "new normal", it is tough and concerning to see a large country like India not only regress into stages of the pandemic most of the world are moving on from.

3. Return of Firing Squad Executions - I'm not going to debate the lesser "form of impact and hurt" to the body for the death penalty. No, no. Quite frankly, it's an uncomfortable discussion. However, with states running out of doses for the lethal injection, especially as death penalty decisions are rising, states, such as South Carolina, are now looking at the return of "firing squads" as a measure to use.

I don't know, despite the anonymity or whatever used in the process for the individual being executed, I can't wrap my mind around this being humane. What does that say about those on the firing squad?

As you can tell, this story bothered me this week.

Chinese Rocket Down to Earth - "A Chinese rocket is headed toward earth, and we have no idea where it's going to land. Experts aren't worried, though."

That was a quote from a news report I watched this week.