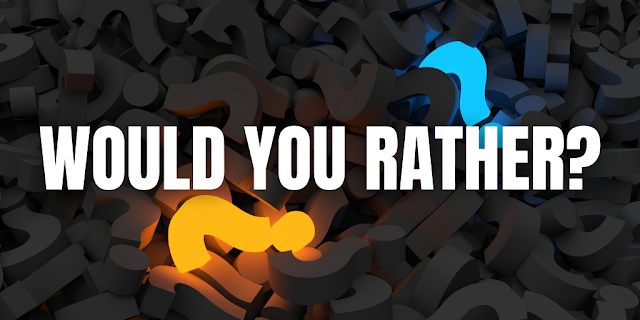 This edition of "Would You Rather" is another posted with questions credited to the NBA Would You Rather NBA Account on Instagram (See Here). Adding to the fun, this edition (and possibly future ones) are all NBA basketball questions.
161. Would you rather watch LeBron in the 90s or Jordan in the 10s?
So we're kicking this thing off with a toughy. Because Jordan and LeBron debates/discussions usually go off the rails rather quickly, I'll just say I would love to see both switch eras, that would be tremendously interesting. However, for me, seeing Jordan play in this era of open floor, less tolerance for rough play, and protection of the "superstars", would be verrrrrrrry exciting. MJ might average 40 points a game. His mid-range game in today's three or paint play would also be refreshing.
162. Would you rather have Jason Kidd or Steve Nash?
I've ALWAYS been a fan of Jason Kidd. As a Knicks fan, it was tough watching him lead the Nets to two consecutive finals and be the core piece of a vastly more entertaining style of play than what the Knicks were offering at that time. Yeah, we had one year of Kidd in orange and blue (which is still weird to see), but he was 40. Nonetheless, he's definitely the more complete player over Nash.
163. Would you rather have Dirk Nowitzki or Karl Malone?
Dirk is one of my favorite players of all time. Plus, Karl Malone is kind of a scumbag.
You know you were thinking it too...
164. Would you rather have Devin Booker or Donovan Mitchell?
Oooooooh, this is a tough one!! I think I'm going to go with Devin Booker on this one. I just feel like the upside for Booker might be juuuuuuuuuuuuuust a bit higher.
Plus Booker has an awesome first name. #IYKYK
165. Would you rather have Jayson Tatum or Trae Young?
Trae Young is the kind of player that if he isn't on your team, you can't stand watching him ball. That's how I feel every time the Knicks play the Hawks - dude is frustrating as hell with all of the tacky fouls he looks for.
I also wish Tatum was a Knick. So yeah...
166. Would you rather have the 2010 Lakers or the 2016 Cavs?
The 2016 Cavs are vastly underrated. It's hard to be underrated as a championship team, but their legacy is the mighty comeback from 3-1 against the 73-9 Golden State Warriors. The comeback pigeonholed them into this underdog legacy. We forget how talented that 2016 Cavs team really was (57 wins!) - you know, with the juggernaut that was the Warriors removed.
Give me LeBron, Kyrie, and co.
167. Would you rather have De'Aaron Fox or Shai Gilgeous Alexander?
Both of these guys are big targets for me whenever I start up a My League in NBA 2k21. I also really like both of their games and futures. I'm gonna go with Fox just because his speed and athleticism really are a marvel to watch.
168. Would you rather break someone's ankles and miss the game-winner or get crossed up, but end up winning the game?
Cross me up - I'm taking the W. No one will remember that.
169. Would you rather have a dominant guard or a dominant big man?
As a Patrick Ewing fan growing up and being a kid that was generally taller than everyone else, I was all about the big man. It was my style of play. I pretty much was your Euro Big - good shooter, but average down on the block.
As much as I want to pick the big man, today's NBA is all about backcourt play. So give me the tremendous guard. I also envied those with high-end ball handling.
170. Would you rather have the '96 Bulls or the '16 Warriors?
I'll answer this VERY easily - "it don't mean a thing, without the ring."
Give me MJ, Pipp and co.