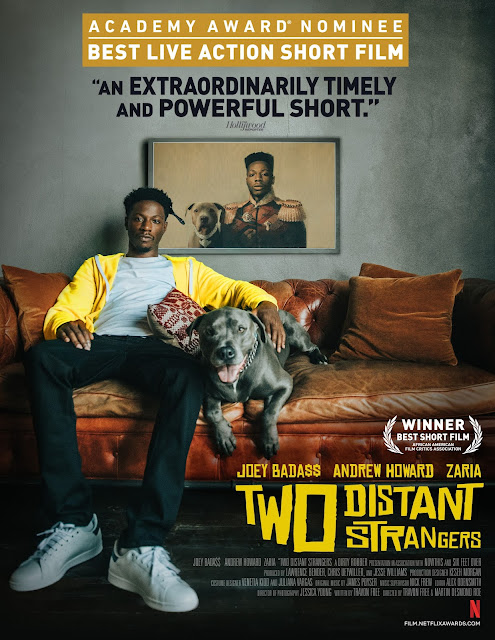 A man trying to get home to his dog after spending the night with a woman he likes is stuck in a loop forced to re-live instances and scenarios where he is killed by a police officer.

For a short film (around 30 minutes) it's difficult to choose one significant scene, but I find the following to be interesting...

...Carter realizes just talking to the police officer upon exiting the building could get him out of the loop, just to realize it leads to another scenario of being killed in an alleyway.

"Hell no. I’m smarter than him, faster than him. Shit, I probably got more money than he do. Definitely more handsome than he is. So I’mma figure something out. ‘Cause, it don’t matter how long it takes, or how many times it takes. One way or another, I’m gettin’ home to my f***ing dog.”

Two Distant Strangers is a remarkable piece of work that does plenty to tackle the issue of the paranoia Black America endures before law enforcement. In fact, this 30-minute short film does more than many lengthy films or documentaries - it's that good in its compact presentation.

TDS has the obvious looping plot that begs the question - why do they keep killing us? And, how do we make it stop? Intelligently woven throughout the film is the debunked theory that the two sides just need to hear the other side as the structure overrides the understanding of the two sides. We see this after both Carter and the officer have a discussion in the car, have a civilised conversation on various life topics, just to see him die in the alleyway. The film leaves you with the lesson that this structure allows the brutality of black bodies not because of a lack of willingness to understand, but because well, that's just how the cycle is replayed - or, the country's structure functions.

I especially love the humanization of Carter - he was in love, and just wanted to get home to his dog. It's another piece we lose the reality of in many of these cases that go public.

Besides the awesome plot and execution of messaging, some major props must be given to Joey Bada$$ who played the role of Carter so well. Working as his counterpart, Andrew Howard stole the show as the grizzled NYPD officer. Their performances were strong and added to the beauty that is this film.

I understand TDS may not hit everyone the same - political affiliations included - but, I do think that's also part of why this film is necessary to view...and kind of speaks to the message of the film.

I highly recommend TDS. It won an Oscar, carries a great message, and gives you ALOT to think about in thirty minutes. Load it up on Netflix as soon as you can.