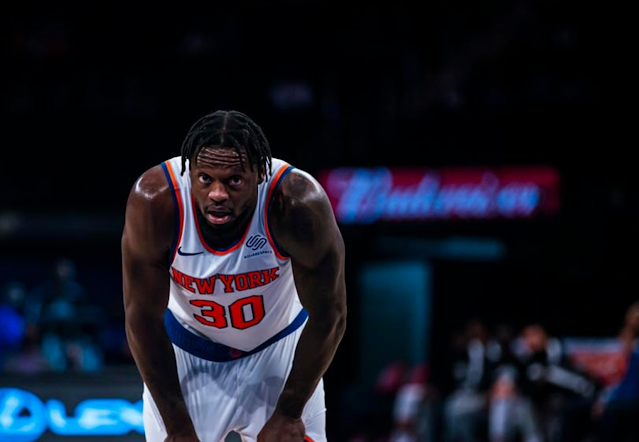 It's been a while since I've punched the keys about my beloved New York Knicks. Over the span of this blog, most of the time those posts have been rants, complaints, and other forms of literary frustration and anger with the franchise. Really, who could blame me? The reputation, history, and record speak for themselves.

But this year is different. Off the heels of yet another regime change - one that seemed like the smart move rather than the flashy kind - my guys are positioned to play competitive basketball through the end of the season and likely, in the playoffs.

PLAYOFFS???!!! Yes, insert your Jim Mora voice at this point.

While I can go on and on about the individual improvements, surprises, and amazing stories that have been this 20-21 campaign of New York Knicks basketball (maybe another day), this team, this time, and this moment in history has me looking at the NBA - and sports, in general - with a different perspective.

After all, the Knicks, expected by no one to do anything other than try to improve the young core they have and settle for the lottery, have done everything an NBA franchise ought to do and accomplish with a budding roster. Think about that, the Knicks did something right! Actually, they excelled at it!

This team has developed a bonafide superstar in Julius Randle (and MVP candidate by the way), increased the level of play of all of its young players, scouted the right undervalued free agent role players (Alec Burks, anyone?), surrounded the team with the appropriate veterans (Derrick Rose and Taj Gibson), has developed team chemistry and a winning culture, and finally, yes, is competitive.

All of it got me thinking...if a team and franchise like the Knicks can put it together, and not fall victim to losing and "tanking", then why do we allow it in sports? Seriously. Why?

TO THE VICTOR GOES THE SPOILS

My first and biggest lesson realized is this - we need to stop rewarding losing teams with high overall picks in the following draft.

Radical? No. I just think it's one of those "rules" we've just been used to in sports that have drafts to dispense incoming talent.

Think about it. Why do we reward the worst team in the league by handing them one of the greatest assets there is - a top first-round pick? What if we flipped the system to give the winning teams the higher picks?

If there is one thing I know as a Knicks fan, badly-run franchises make bad decisions. They shouldn't be rewarded for it.

On top of that, I believe a system like this would curtail tanking as a measure and strategy for "rebuilding". It's often a safety net and cheap way (literally and figuratively) not to put the effort into player development, scouting, and other measures with the attempt to compete. Nothing hurts sports more than franchises that aren't placing competitive teams on the playing surface, and of course, making money while doing it.

A system that gives the playoff teams the top picks (with maybe the lowest-seeded teams having the greater odds in the lottery) keeps everyone accountable.

You lose, you don't get rewarded. You win, you get rightful compensation. It just makes too much sense.

Of course, to continue on my competitive balance accountability, I do think the buyout scenario needs to have provisions. I'm all for player freedom, and yes, organizations should also have the option to let players walk if they don't plan on making them part of their future. But I'm tired of the routine of serviceable players getting bought out and joining top teams mid-season or in the last leg of the season.

Looking at this current NBA season, I would like to see the players bought out from their contracts only be eligible to sign with the teams at the time of their buyout with a winning percentage of .500 and below. Imagine how that changes the landscape for competition - and yes, accountability.

Just this year, Andre Drummond wouldn't end up a Laker. And Blake Griffin, wouldn't hop aboard with the budding Nets.

As we make our way out of this pandemic, I think we've all learned that time is not guaranteed to us. I couldn't believe some Knicks fans in the offseason wanted the team not to make a "win-now" trade for targets like Chris Paul or Russell Westbrook. Let's just develop guys, get a good draft pick, and build toward the next few years!

Another year of bad basketball? For what? Uh uh. I've already wasted decades of my life on that!

I'm sure Cubs fans can sit you down and talk to you about this, but those sort of "build to x year" or "trust the process" strategies are not guarantees. You can also ask Philadelphia 76'ers fans - even in a more successful approach, it still doesn't guarantee you the holy grail.

It's time to win now. Today. This year. That should be the case every year for every fan base, really.

I don't know when my number is up, but I would love to see the Knicks win an NBA championship - just once.

I'm glad the Knicks decided to go for it - more so, not phone it in -  as the experience is a far greater catalyst for growth than simply playing meaningless games, picking early in the upcoming draft, and hoping somehow all of that talent clicks and turns over the engine starter on a losing culture. This is the same for all sports.

I know, it may sound like I'm a crazy Knicks fan getting carried away with this one prosperous season after years of futility - and that can be true. But I promise you, it isn't. This is just an awakening from everything that has been a global pandemic combined with being a fan of one of the worst run franchises in sports, that all it takes is the right leadership in place with an established and building culture to help turn things around. Or at the very least, to be competitive. Or for some, it's just, dare I say...just trying.

Bad teams in all sports have historically been bad for a reason.

The same NFL teams consistently draft top quarterbacks and fail to develop them. Bad NBA teams have historically been in the lottery without any movement. Bad MLB teams have cycles of two competitive years where they briefly put it together before becoming disappearing acts altogether for years.

As a Knicks fan, this season has brought me joy. It's been fun. And to be blunt - we Knicks fans deserve this. And I want that joy for fans of other reputably bad teams as well.

After all, the Knicks have shown us in one year - it doesn't have to be that way.