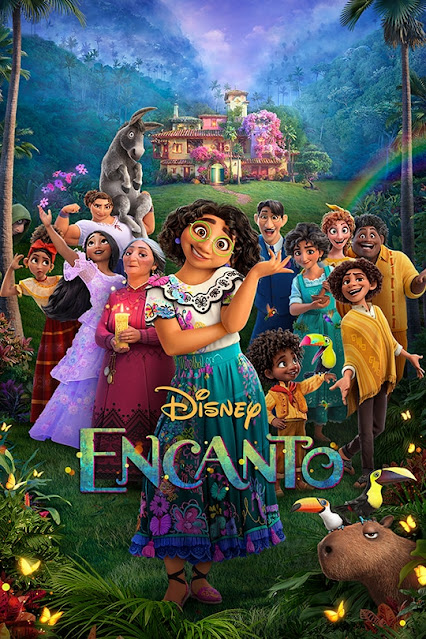 What is it about?
A young Columbian woman struggles with the reality that she is the only member of her family without magical powers.
Who is in it?
Stephanie Beatriz - Mirabel
John Leguizamo - Bruno
Maria Ceclia Botero - Abuela Alma
Favorite Scene:
[spoiler alert]
After the cracks in the magic finally causes a stir, Mirabel and her Abuela have honest words about the magic and the sustainability of it all.
Favorite Quote:
"Maybe your gift is being in denial"
Review:
Encanto is a highly interesting film. Of course, there is the hype and the intrigue that comes along with such a film as it builds a reputation, but really, for me, the film is so outside of the box for Disney, that it is refreshing, engaging, and offers so much replay value. Probably, the reasons for its popularity.
Encanto offers up a plot that unravels and unveils itself as the film progresses, leaving you continuously engaged on the matter to tie the whole movie together. Until you get there, you're given quirky characters, a wonderful soundtrack, and an abundance of insight of what eventually comes together. The mystery carries the film.
Yet, the beauty of Encanto is its diversity of characters in appearance, in customs, and in representation, as well as the missing element of the traditional "princess" protagonist who relies on a male character for a plot solution. Mirabel was strong and handled her own.
Yet, it's the message (or even lessons) from the plot that is left up to the viewer to interpret - however you view the magic and its power source. For me, Encanto touches on the strength to abide and stay true to one's ethical compass, despite its conflict with tradition. Magic isn't defined by that tradition, but by the integrity that one carries with the tradition.
Yes, I know - deep stuff. Encanto is magic like that.
Of course, I highly recommend it. Go turn it on and get your own takeaway.
Grade: 4/5