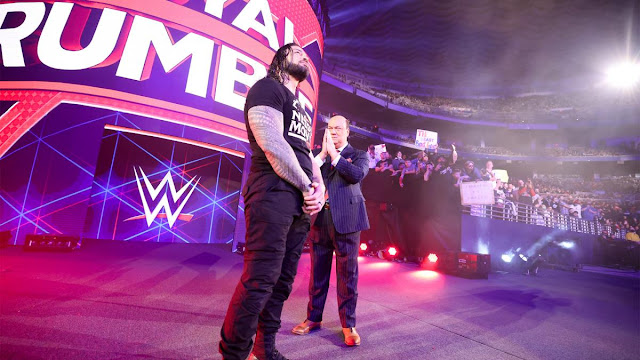 The Royal Rumble is easily my favorite wrestling event of the year - solely for the sake of the match, the aura of the pageantry, and all of the drama that comes with it. Nothing is like that buzzer going off, the surprise entrant, and that possible encounter we've been waiting for, or we thought would never happen. It's pro wrestling's All-Star Game in a nutshell.
The event carries so much nostalgia for this wrestling fan, that no matter how bad I think the WWE product currently is - and believe me, I'm no longer avidly watching it - I will still plan my weekend around the event. Unfortunately, this year's Rumble provided that nostalgia, but the sheer struggles of the current product - again, at least to and for this fan - came glaring through the cracks.
Overall, I found the event to be fun. Seth Rollins vs. Roman Reigns was awesome. Mickie James getting her flowers was super cool, you can't replicate that big fight feel of Lashley vs. Lesnar, and of course, all of the drama that ensued with a Paul Heyman swerve - all quality stuff. However, the match itself - specifically, the men's Royal Rumble, was just...blahhhh.
How badly do I think this premium event (a-ha!) was? It's I-probably-won't-ever-watch-this-ever-again-on-Peacock-bad.
With that said, here are some quick thoughts on the Royal Rumble 2022:
- The Royal Rumble being held in these massive buildings of 30K+ just continues the perplexity of the WWE product - yes it's bad, but they continue to grow and make money. It might just be me who finds the product to be repulisive. Who knows?
- The WWE has been scaling down their sets and personally, I think it adds to the presentation. Some of the overcompensation of video screens and moving images at times takes away from the presentation and aura of the wrestler - again, just this guy's opinion. Tonight's setup was cool.
- Roman Reigns quite possibly is pro wrestling's biggest star right now. The dude is just in a zone right now - he gets it. On ALL levels. 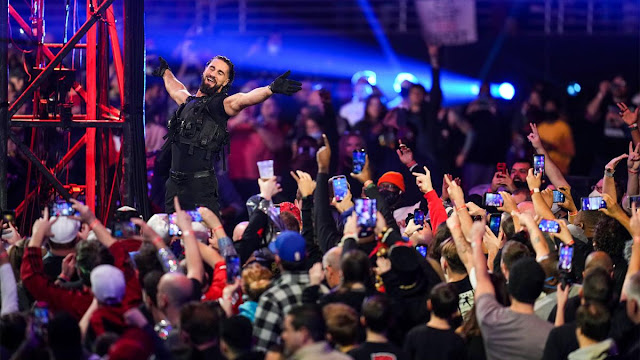 Seth Rollins coming out to the Shield entrance music and in tactical gear was a nice touch to the storyline and furthers Seth's developing "Joker-like" persona. I'm not sure I'm completely in on the character, as I think it needs some refining and at times can be cringy in a bad way, but he is getting there. Seth in the ring though is good stuff.
I loved the match, including the ending. I was shocked to see this continue on, especially so with what we saw develop later in the night.
- Two Rumbles will be a thing going forward (as it should be), but I truly wonder when the women will once again have the main event spot. You can only rely on these "legends" so often who now return for the Rumble as commonplace before it loses its shine - if it hasn't already.
- The word "legend" really does get thrown around too often (or too easily) in pro wrestling these days. 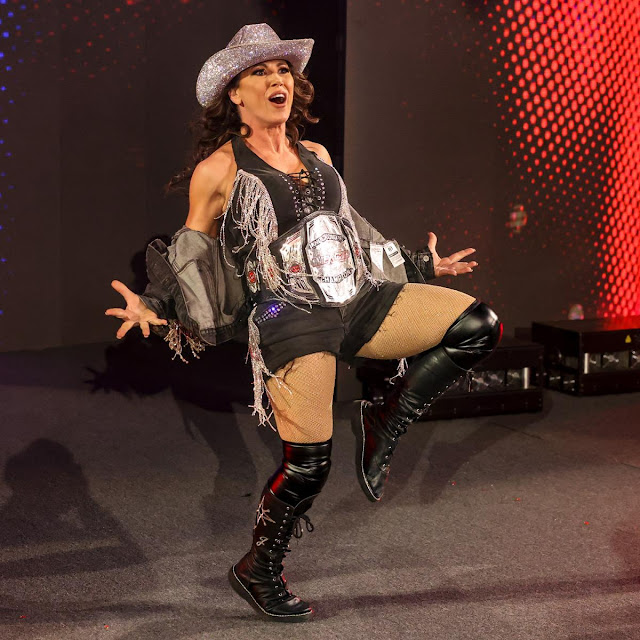 - I was thrilled for Mickie James, and also, for Impact Wrestling. Mickie definitely deserved better than what she received from the WWE in her last stint. Also, Scott D'Amore and company over at Impact Wrestling have been doing some revolutionary things. Mickie James as Impact Women's Knockouts Champion entering the Royal Rumble will forever be a headline memory for this Royal Rumble. That's pretty dope.
BTW - Mickie's entrance was badass. How the heck did they not have anything for here?
One last thing on Mickie - do we somehow get Lita vs. Mickie in an Impact ring? Make it happen D'Amore!
- Ivory is sixty years old! God Bless that woman - she looks great for her age! And yes, still amazing in the Right to Censor role. I legit was laughing out loud.
Also, does anyone else now wonder how fans with no knowledge of these previous wrestlers receive them - especially, not having context on their careers or their gimmicks?
- Nikki A.S.H. doing the evil superhero shtick might be the best thing in pro wrestling in a long time. The attack on Molly Holly was perfect.
- Rhea Ripley has some presence - wow. Hopefully, the WWE does right by her. 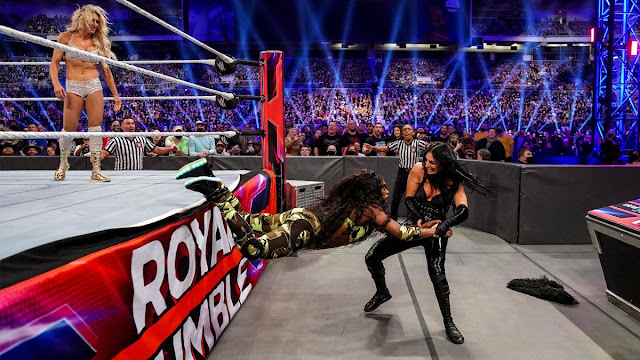 - Everything that was Sonya Deville attacking Cameron, just for Naomi to come out and create that Rumble showdown we all love, was great! Classic Rumble stuff. The eventual (again) classic heel elimination of Naomi by Deville was nice.
- Nothing against Ronda Rousey, as I get that she sells - especially so for a Wrestlemania at AT&T Stadium, BUT (you knew that was coming) the situation has to be tough for the women on the roster, right? How can it not be?
And once she enters, it was pretty much a done deal that she was winning, yeah?
- Becky Lynch vs. Doudrop was a helluva match - despite an extremely tough card placement. It also doesn't help when the Wrestlemania sign catches on fire during the match as well. Yikes.
- The video package for Lesnar vs. Lashley was absolutely amazing. WWE does these things better than everyone. 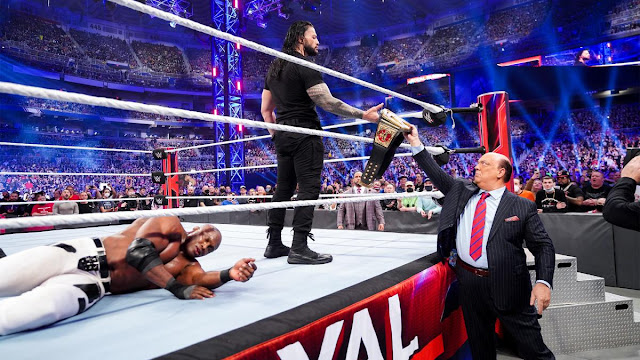 - Watching Lesnar vs. Lashley throw these power moves on each was great theater. I understand the bigger story of Heyman and Reigns, but they have to revisit this down the line. Hopefully soon.
Though, it is a VERY nice dilemma of having Reigns, Lashley, Lesnar, and Rollins all intertwined like this as we head towards Wrestlemania. Somehow, I don't think it'll be this complex, but for episodic television purposes, I hope it is.
- Also, Lashley took those German Suplexes rather odd, no? I was legitimately concerned about how he landed on his elbow/side so often.
- Edge and Beth vs. Miz and Maryse was there. It was good, but I wish I could say I cared for it going in. But with much respect to all involved, it was entertaining - that's all I can ask for.
- I've already said it - the Men's Rumble was the runs. For most of the Rumble, no one (other than AJ Styles) felt like a legitimate option to win it. In fact, there was a stretch where there was no drama, and felt like we were getting a bunch of random guys who weren't over, coming in. Nothing felt special, or caused me to care about showdowns, or rooting for anyone, or pondering about possibilities - nothing. I actually got up and made something to eat mid-way through...just boring.
Kofi finally got caught in his shenanigans - but wasn't he due? And honestly, I think it has run its course. Give Kofi a win? No? no? Okay...fine. I guess we're done with that.
Dolph Ziggler has been in 15 Royal Rumbles - when did that happen?!!!!
Bobby Roode and AJ Styles squaring off to TNA chants was so cool. Just goes to show you the legacy the company will ultimately have in the long run.
BTW - I really wish Roode could somehow return to Impact.
Is it safe to say the WWE is done with Big E at the top spot - much like Kofi.
Bad Bunny will forever have my respect for what he does as a celebrity performer. Best one, ever - not even close.
It might just be me, the Shane McMahon character has jumped the shark years ago. Again, much respect to the dude, but I just don't buy the owner's son - the guy that once lead the Mean Street Posse - being a viable threat to the main roster when he enters the ring - ehhhhhh.
Again for the people in the back - this Rumble had little drama, no side storylines, or anything else that worked within it - just flat.
- Random thought - there are a lot of current WWE theme songs that are horrific. 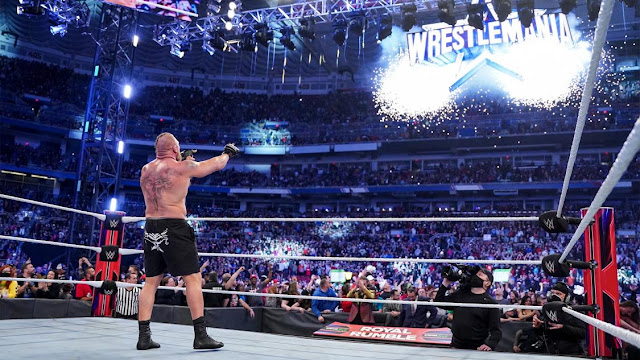 - Brock is a megastar. Like Rousey, I have no problem with him winning. But wow - it's scary how few options there are for potential winners. Heading into the event, I thought this was one of the first Rumbles in recent memory that was wide open - but really, it's easily the one with the lightest star power in years.
- And finally...
I'm not sure how excited I am for the road to Wrestlemania. There is still time, but shouldn't be a feeling for a fan as the Royal Rumble goes off the air.
---
All photos courtesy of WWE.com