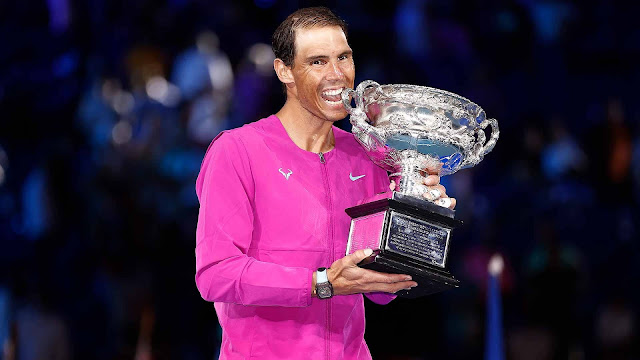 1. NYPD Full Support - It was for an unfortunate event - the fall of Officers Jason Rivera and Wilbert Mora - but there was empowering strength in thousands of NYPD officers flooding the streets for the funeral of both officers. Also empowering was the voice of Dominique Luzuriaga, who delivered a touching eulogy for her husband, Detective Rivera.

Bad stuff, but good stuff...because of bad stuff. Our city is in such a dangerous place.

2. Rafael Nadal - The premier tennis player set a new record of 21 Grand Slam wins with a victory at the Australian Open this weekend. The Fuscia King is now arguably, the GOAT of men's Tennis.

3. Mina Kimes - I'm not getting in-depth on the fiasco that was Kimes and former 49ers QB, Jeff Garcia, and then the internet, and then everyone's opinions, yada, yada, yada. I'm giving Kimes the "Up" this week because she's badass, she didn't back down from the charge, she remain poised and within her character while defending her comments, and then oh yeah, trolled all of it in the end. Because, she was right.

Kimes is my hero. Supreme courage, even among fighting sexism, misogyny, and well, stupidity.

1. Ukraine/Russia - This whole Ukraine/Russia conflict just gives me bad vibes of the beginning of some kind of takeover - because it very well could be that. And we don't need Russia taking over anything else...especially Democratic-run states.

2. North Korea Test Missile - As if the world hasn't given us enough looney world leaders to worry about, this week gave us North Korea confirming testing missiles that have the potential to reach the U.S. territory of Guam. Ugh, come on...

3. MLB Hall of Fame - And in a much less serious "down" for the week, yet still, a rather annoying one, MLB continued to give us baseball fans the kind of off-season that drives us to check out new sports. Not only are we dealing with no baseball activity of any kind, but now, we have to make sense of something so backward like Barry Bonds and Roger Clemens being left out of the Hall of Fame for steroids, and well...well, we've beaten this drum to exhaustion. For a decade, actually. And we still got it wrong.

Be better, Baseball. Writers, you be better, too. Owners, care about the game a little, huh? Everyone, can we get baseball back?

1. SAT Online - Students in the United States will now take the SAT entirely online, beginning in 2024. This is a game-changer in so many ways, especially in the realm of the achievement gap regarding specific demos. I've long disliked the SAT as a college-prep measurement as it is a poor predictor of undergraduate success. Regardless, the online feature is one step close to providing an equitable experience for the college access experience.

Sorry, just a student-affairs professional here who gets nerdy about this stuff.