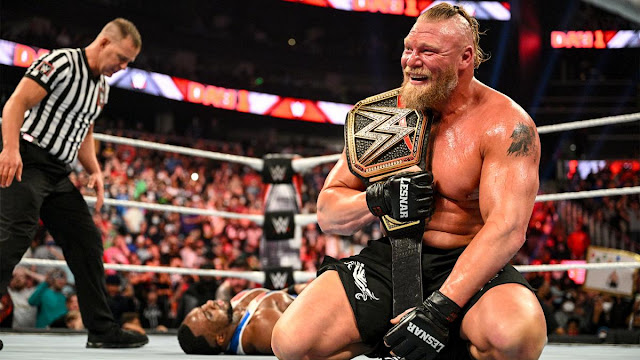 I immediately warn you, this review will be skewed. Why? Well, yours truly hasn't followed the WWE product since Summerslam. I just haven't been interested in any way through 2021, and finally, I stopped hanging on with the hope that the product will hook me. I just simply gave up. There is too much out there to wait.
RAW has been atrocious - I don't even skim through the DVR recordings anymore unless something pops up in the general wrestling news feed worth seeing. Smackdown will typically and occasionally get a fast-forward style of viewing (mainly due to having to see Roman Reigns' work), and NXT feels more and more like a product that is Triple-A baseball - it's okay, but I can spend time invested into other products.
So yeah, I've been out of the loop. And this review surely will reflect that. However, with a new year (and a lazy Saturday Night), I gave the WWE my time and interest. I wasn't disappointed. And this is good heading into the Royal Rumble, and ultimately, Wrestlemania season. I guess time will tell. With that, here are some quick thoughts on WWE Day 1:
- I really like the name (and concept?) of Day 1. New Year's Day can be a really good day to capture viewers, especially considering the current climate we now live in. Also, again, a good way to give fans a chance to tune in with a fresh start. Hey, they got me!
- Vince and his phrases, man - Premium Live Events. Say what you want about the WWE and their glossary of refining situations, alternative sayings, and oddly phrased wrestling terminology, but they eventually do catch on. We always comply. See: "Sports Entertainment", "WWE Universe", and more. WWE has long been out of the pay-per-view game, and since Vince dislikes the terms "house show", it's a live event, pal! - then Premium Live Event sounds like the next installment of WWE-isms. It's actually not as crazy as some of the others we've been reconditioned to say.
Also, anyone else thinks this is the prelude to a "Premium" tier of Peacock for these Premium Live Events?
- Speaking of Peacock, it is truly terrible in comparison to the WWE Network. Just saying...
- I'm not a fan of the current WWE production. I've always given WWE their flowers in these reviews, but while the entrance set is really cool at times, I think wrestlers themselves get lost in their entrances. They feel less like stars about to hit the stage, and as they get lost in the over-production of their entrance. Just how I see it. The eye can only look at so much.
I also STILL loathe the quick camera cuts.
- All the wishes to Roman on getting well. Even when we try to 2022, 2021 (and even 2020) pop up. 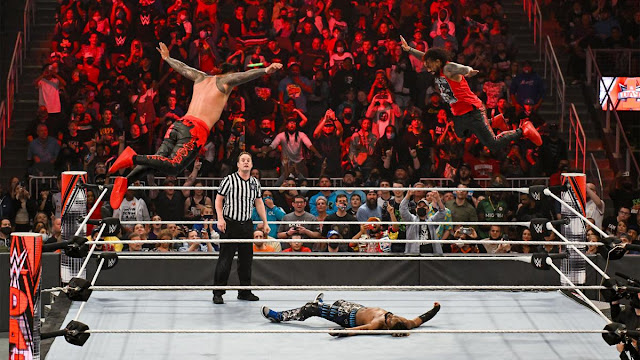 - Have the New Day and Usos ever had a bad match? Opening the show with this was a nice reminder of the talent that exists within the WWE. The Usos continue to be solid performers, though they throw just as many superkicks as the Young Bucks do in their matches who often get criticized for it. Nonetheless, the utilization (and rebrand) of the 3D (to the 1D - One and Done?) felt sacrilegious at first, but hey, everything evolves.
BTW - Obviously, I didn't see it, but a babyface King of the Ring is perfect for Xavier Woods. The dude can definitely make the most out of it.
- The last time I saw Baron Corbin, he was doing his broke gimmick after losing his crown, which was entertaining. From his segment, it seemed he hit the lotto, and well, now, I guess I'm not sure. I have no experience with Madcap Moss (that's some name), but he seemed eh. Not sure of the long-term vision for this character, or even Corbin's, but just a lot of blahhh here. The segment felt VERY early 90's WWF, which I guess is OK. 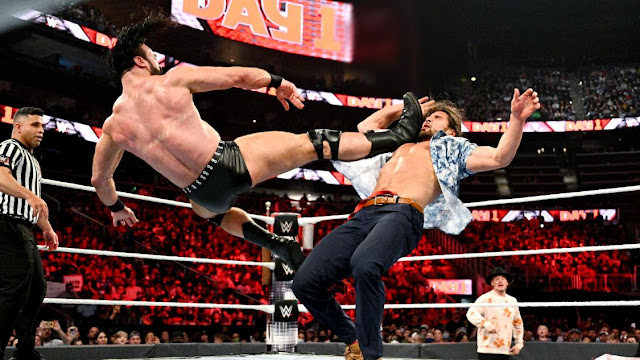 Drew McIntryre looks insanely jacked and remains a solid attraction. I couldn't get into this much other than waiting for a good claymore kick. I love that finisher.
- Has WWE pay-pe...errr, premium live events formatted like this lately, or is the constant commercials between matches something new? I do miss a solid backstage interview prior to the match.
- RKBro vs. Street Prophets was another solid tag team match. Just exactly how many tag teams has Randy Orton been a part of that had a smash-up name of RKO? Regardless, this one wasn't as good as the opener and felt like a babyface vs babyface contest with the Migos at ringside, so I wasn't sure if I missed something, or if this was supposed to be a feel-good match for the Atlanta crowd and the viewers.
The after-match celebration surely felt that way as well. 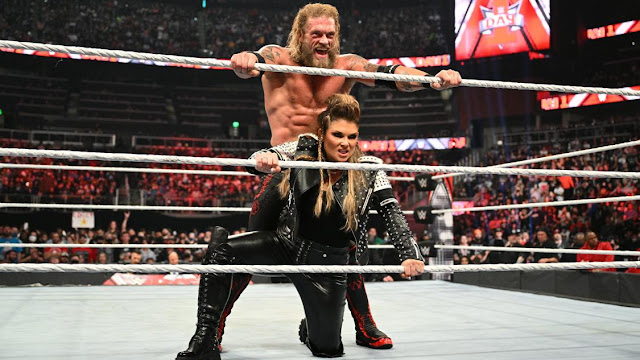 - I don't get Edge using the Brood's entrance just to go into his usual theme song there. I think it's cool if left reserved ala "The Demon" for Finn Balor, but this felt like too much. Eh, maybe just me.
From the hype video, I found it hard to get into this match because quite frankly, I wasn't sure why either would care about this "respect" sort of stuff at this stage in their careers. Regardless, it's Edge vs. Miz and I thought it was cool enough. The match was slow-paced but really built to an ending that felt underwhelming. I wasn't a fan of Edge winning off of the distraction. Especially if we're supposed to head next toward a mixed-tag match, which is where all of the signs are pointing to.
Beth Phoenix looked badass, and tremendous.
BTW - Edge's facials are absolutely gold. The beard gives an evolution to his character in this later stage of his career.
- I miss "The Man" Becky Lynch. I always thought the moment she headed up the arena steps through the crowd with a bloody face and a broken nose and stood tall for that iconic camera shot, that she would be the next HUGE babyface for the company. Lynch is great as "Big Time Becks" in the heel role, but she's so much better as a babyface. I was hoping they knew what they were doing with her since her Summerslam return, but I'm not overly convinced this was the right decision.
Her match with Liv Morgan was good. I never once believed Morgan would win, but it was nice to see another fresh face getting some run in what can sometimes feel like a stale WWE product.
Was Becky supposed to use the ropes for leverage in her win? 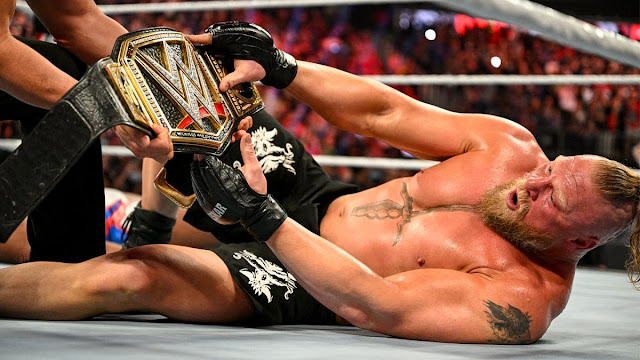 - Kudos to the WWE for adding Brock Lesnar to this match to deliver for fans. They could have easily packed it in and punted on the Lesnar/Reigns program until Reigns can return, but they didn't. Especially for the paying customer in the building.
This match was VERY entertaining and I very much enjoyed the psychology involved of everyone taking out Lesnar as early and as often as possible. Lesnar throwing suplexes all over the place is still badass and so entertaining. I still don't get the Seth Rollins character, but the guy is always solid in the ring. I remain happy for Big E, even though it ended here.
Oh yeah, it was nice to FINALLY have some sort of interaction between Lesnar and Lashley - that was awesome!
I also have to throw this out there - babyface Brock Lesnar is something I never thought I would see. That is definitely something fresh and welcoming.
Lashley winning was certainly surprising. The staredown with Lashley after the match was intriguing, and of course, him defeating Big E felt like them very much removing Big E from the top tier as we head into Wrestlemania season. Something that is highly unfortunate. But again, are we surprised?
---
I am intrigued by where we go from here though, enough to hit play on the DVR for my recordings of RAW. Day 1 wasn't exactly a great show, it was sorta-good - surely entertaining enough. It's still not on the level of recent premium events (see, I got it down) from AEW and Impact Wrestling, but that's just my opinion. My interest and pleasures, I guess.
Ultimately, they've hooked me just enough to give them a chance. I'm a little concerned over another Lesnar run heading into Wrestlemania, as well as how underwhelming everything not in the main event felt. But again, it's just Day 1. Let's see if there is a new direction, or if, it's more of the same.
*All pictures courtesy of WWE.com