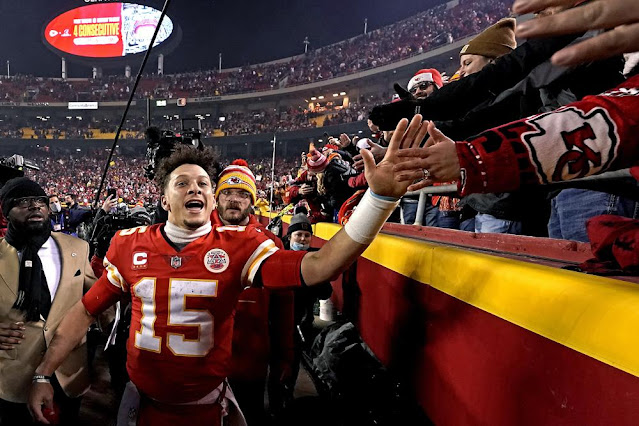 1. NFL Playoffs Divisional Round - Well, your boy actually watched some football this weekend. Yeah, like for reals - and I wasn't disappointed. I watched all four Divisional games and what a weekend it was for the NFL. All of them, highly entertaining games, that even a super casual fan like me who occasionally tunes in, was absolutely hooked. I'm actually looking forward to next week - truth be told, I've always been a big fan of Conference Championship Sunday.

1A. Chiefs vs. Bills - Tonight's game might have been the absolute best football game I've ever watched. Gripping. Entertaining. And yes, outright in awe at what I watched tonight.

1B. Patrick Mahomes and Josh Allen - Mahomes has always been my hook to football, the way Michael Vick and Peyton Manning were. But damn, Josh Allen, that dude is legit! Again, so much fun tonight.

2. Declining Omicron Variant - Omicron is on the retreat here in the Northeast. While that may not be the case everywhere across the country, and expectations are that it will be at some point for all in February, it's still a bit of a relief after things didn't seem so promising at one point. I'm over these variants. But more importantly, what is our new normal? Because what was, ain't it. Even if we try to go back to it...

3. Ayoka Lee - Yo, Lee put in WORK today setting a new D1 record of 61 points - the most points in a single game in Women's Basketball! More impressively, Lee did it all by going 23 for 30 from the field. And oh yeah, it was against #14 ranked, Oklahoma. Baller.

1. NYPD Officers Shot - NYC continues in peril this week as the NYPD saw one officer shot and killed, and another currently fighting for his life after more gun violence in the city. The deceased officer, Jason Rivera, was a rookie officer at the age of 22 (and a newlywed). Rivera joined the force because he wanted to make a difference in his community.

2. Voting Rights Bill - In more bad news, securing voting rights wasn't important at all for our country this week.... or really, ever. From the two senators who joined Republicans in voting against it, to the lousy efforts from this lame-duck administration to get it done, it's so incredibly mind-boggling to me that we're fighting to preserve the right to vote in 2022.

3. Ukraine/Russia - If the world couldn't be any more concerning as it currently is with a pandemic and all of the domestic issues in our news feeds, we now have Putin and Russia threatening to invade Ukraine. For what reason? We don't know. But we don't need is another democratic country falling to an authoritarian state - or, giving hope for other authoritarian states to do the same.