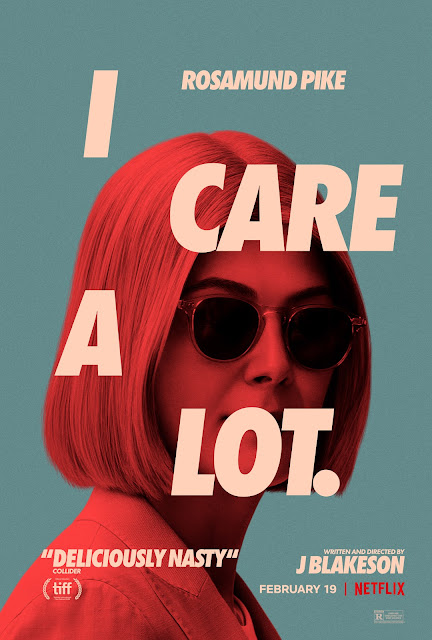 A legal guardian, who is deceitful and cold in her practice with the elderly and their loved ones by draining their savings, meets her match when a woman she tries to swindle becomes a bigger challenge to her scheming empire.

After making their moves, Roman and his team leave Fran for dead and has a face-to-face encounter with Marly where both finally acknowledge the other with dislike, with just a hint of mutual respect included.

"Every fortune ever accumulated started with a leap of faith. But before you take that leap, first take a long, hard look at yourself. Know who you are. Ask yourself: am I an insider? Or am I an outsider? Am I a lamb? Or am I a lion? Am I a predator or am I a prey? Am I good at money? or Am I good at people? What am I willing to sacrifice to achieve my dreams? What lines will I not cross? Don't try to be anyone else. Just know who you are and use that to your advantage."

I Care A Lot is a perplexing film, but a good film.

Immediately, it should be noted, that if you have loved ones in the senior care system, or have experienced it in any way (I have), parts of this film can push buttons. Especially since it does not carry a true protagonist. The film follows Marly Grayson who is dishonorable to the core, but her character is so rich with easter egg depth that you can't help but admire her resolve and drive.

With that said, Rosemund Pike is EVERYTHING in this film. She epically portrays the conflicting role of Marly Grayson, and it carries the film outright.

If you're a viewer that needs a rooting interest in films that touches on ethics, such as this one, I Care A Lot will certainly leave you unsatisfied. Spoiler Alert: there is no rooting interest. In fact, at times you begin to wonder as the two antagonists battle if there is any satisfying resolution to the main plot.

However, if you can look past these elements, I Care A Lot really hones in on the sacrifice, dedication, and sometimes outright unethical issues that occur within our society (including the horrific elderly care system) that is necessary to become "successful" in the country. The final scene of the film plays a big role in this as well.

Again, it's a really good film, that causes internal thought on the issue of ethics, economics, law, and who the "successful" people are - mainly, an outlook at capitalism. All of it is perplexing, with some action drama built-in. A good watch. If not for anything else than the amazing work of Rosemund Pike.