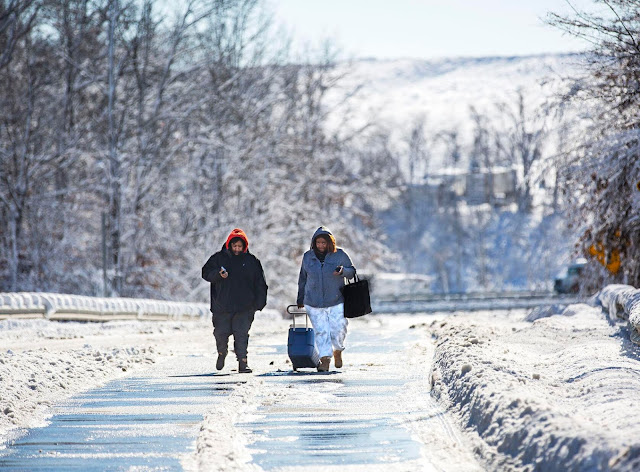 1. Justice for Ahmaud Arbery - It won't bring Ahmaud back. It won't right the wrong done. I'm not even sure if it provides solace for his loved ones. However, having those three men finish their lives in prison is the most that could have been done. Kudos to Judge Timothy Walmsley and the point he made by holding a minute of silence to prove it was just a fraction of how long they chased Arbery.

2. Sidney Poitier - I learned about Poitier through a film class in High School. To this day, I'm thankful for a teacher to recognize the greatness of black actors and the contributions of others to the entertainment industry. From "To Sir with Love" to "Guess Who's Coming to Dinner", I adored his work, and him as a person. A life well-lived.

3. Klay Thompson's Return - After 941 days, Klay Thompson returned tonight for the Golden State Warriors. A tremendous player - as a hoops junkie, it's good to see Klay back.

1. Omicron - From being back at home with my son (his school is closed), and everything else surrounding what we're enduring, this isn't fun. Like, at all. All these variants need to go away.

2. I-95 Motorists Trapped - This story was horrifying. Due to a six truck pile-up on I-95, hundreds of motorists were trapped on the Interstate for up to 20 hours. One of the many horror stories of extreme weather this week.

3. The Bronx and Philadelphia Fires - Two cities endured two fires that caused the deaths of so many people - including children. Many more are in critical condition, and of course, the hundreds who are now homeless. Pray for these people - ugh, heartbreaking.

1. Dirk Nowitzki - Selfishly giving some love to one of my favorite basketball players, Dirk Nowitzki, who had his number retired this week by the Dallas Mavericks.

Kiara Davis (left) and Aja Brown walk up the southbound I95 on-ramp toward Route 234 in Dumfries, Va. on Tuesday, Jan. 4, 2022. The two brought a cooler with beverages and snacks for anyone they may have found stranded on the highway. Hundreds of motorists waited desperately for help Tuesday after a winter storm snarled traffic in Virginia and left some drivers stranded for nearly 24 hours in freezing temperatures along an impassable stretch of interstate south of the nation's capital.