Yet, the continued story of Jeremy Lin and the phenomenon that has grown out of it is amazing. This past Tuesday was the pinnacle of Lin-sanity, as Lin delivered a game winning shot against the Toronto Raptors that has heightened this craze to a climax. It was a moment this die-hard Knicks fan will never forget. A moment, as a sports fan, that seems unreal. However, it was the moment where I truly believed something larger is at work with this kid. 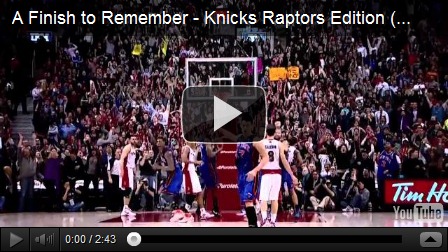 As the legend grows, the amount of “Lin” puns pile up, and the wins increase, in agreement with former Knicks beat writer and current MSG personality, Alan Hahn, “Lin is no longer a novelty, he is for real.”

And while I cannot deny being wrapped up in “Lin-sanity” and all of it’s magical, phenomenal, and inspirational power, my support of Jeremy Lin goes beyond his now celebrity, and of course (of course!!) his contribution to my beloved New York Knicks.

[All-Lin On Jeremy Lin-sanity (Part I)]

My endearment for Lin lies in his faith.

As of late everyone, especially ESPN that has been in Lin Overdrive (and overkill), seems to be interested in comparing Tim Tebow and Jeremy Lin. Through all of the similarities, and some being very far reaching, most have missed the most obvious one. The strongest similarity is their belief in Christ. Despite the media watering this core foundation of both men as a mere mention of “their belief in God”, their faith is the very rock of who and what they are.

Quite honestly, whether we want to acknowledge it or not, it is the side of Lin, as a person, that has made him such a great story. He’s a guy that always deflects every question and attention to his teammates. A guy that gives praise to his creator during his interviews. And let’s not forget his very cool and now very popular “Christian Nerd Backcourt” handshake with Landry Fields before every game.

My favorite quote has been his response when asked if he could believe this is happening. “No”, Lin said. “But, I do believe in an all-knowing and all-powerful God that works miracles”.

After looking at what Tim Tebow has done and what Jeremy Lin is doing, there is no doubt that God is working through these two young men.

So when you think God is “too busy to be bothered with little things like sports” – think again.

If you were skeptical about Tebowmania, you’d be crazy if you didn’t embrace Lin-sanity.