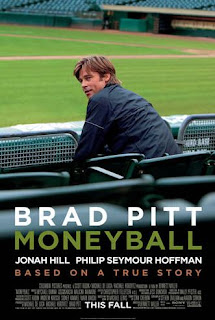 
During an organizational meeting, Billy Beane confronts his scouts about attempting to solve the problems the team is facing during the off-season. While the scouts see the problem as filling the void of departing players, Beane sees the problem of something much greater.


Billy Beane: [Suggesting a player for first base] Scott Hatteberg.
Scout Barry: Who?
Billy Beane: Exactly. The guy sounds like an Oakland A already.
---
Billy Beane: When you get the answer you want, hang up.


Moneyball is a film that has been acclaimed by many and has been nominated for various Academy Awards. While the acting and cinematography of Moneyball gives it that Academy deserving feel, the true essence of what made the concept intriguing is missing.

The success rate of popular books being turned into blockbuster moves has been very low. Unfortunately, Moneyball is another example of this. The film lacks a true feel of presenting the true theory of the moneyball system and how it changed performance evaluation in baseball. It gives viewers a misconstrued view and leaves those not aware of the system very lost. Instead, it focused on Billy Beane, and depicted the Oakland A's as some type of Bad News Bears-like franchise of Major League Baseball. Because of this, the film never gets out of first gear, and is presented in such a simple, non-exciting way that lacks any type of depth.

All in all, the film simply does not do the book the type of justice it deserves. And despite the expectation of not surpassing the book in experience, Moneyball the film still falls flat.

Other than a fantastic performance by Brad Pitt who was so good, he seemed as if he was a Billy Beane clone, this one is not worth the hype. If you're a die hard baseball fan check it out, otherwise, wait for a cold and rainy day to watch this to kill some time.