Dome Pondering Movie Review: We Own The Night (2007) 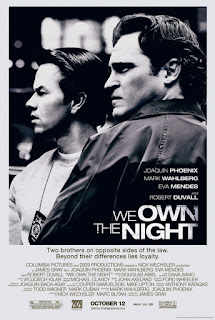 A brother, separated from his brother and father, who are both police officers, must reform his life and become an informant for the NYPD to save them from the very men he helped in his previous life.

The Russians, looking to expand their drug business by branding the product and distributing it through the club Bobby manages, trusts him to let him on the scheme. Bobby, now undercover for the NYPD, goes into the abandoned building where the cocaine is refined leading to a huge bust.

"If you piss in your pants, you only stay warm for so long."

We Own The Night is a rock solid film. Joaquin Phoenix has rarely, if ever, been in a terrible film, and We Own The Night continues that trend. It is a film that has great talent involved as well as a well written, and a tremendously executed plot. Also, what will really grab your focus is the attention to detail in recreating Brooklyn, NY in 1988. From the cars, the night scene, the clothing, right down the late 80's talk and lingo, the film does not insult the viewer in it's portrayal.

As far as the talent, Joaquin Phoenix's portrayal as free-spirited Bobby Green is an amazing one, and one that is in-line with much of his other great performances.  Wahlberg pitches in with his usual-always-good performance, and Eva Mendes met the performances of them both.

Almost feeling like a big-screen version of a TV cop/mystery television show, We Own The Night  will ultimately keep you guessing, and will more than likely keep you engaged.

All in all, as stated above, a rock solid film, and definitely recommended film for the 117 minute running time.