Give Us Competition, The Real Show 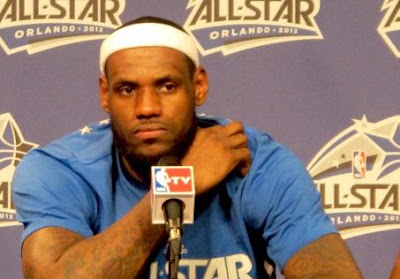 I am about to write something that I haven't written in quite a long time here at the DP. A statement, that seems so foregin to this little blog that and I'm sure to all of the DP devotees. So without any further adieu, here goes: everyone needs to lay off LeBron James.
What?!
Yes. That is right. And no, I'm not punching the keys under some type of influence or against my will. I willingly clicked that "post" button fully aware and in agreement of this statement.
As the clock came to three zeroes to conclude the NBA All-Star Game last night, the overreactions and the haters were in overdrive criticizing James' pass in the final seconds of the game.
[Sideblog: Apparently we decided to neglect the Deron Williams' potential-winning three ball that barely touched rim.]
The argument being used is once again James is shying away from the big moment, and is once again deferring during clutch time. Or as this Knicks fan refers to it through gritted teeth, "Miller Time". Because Reggie Miller was just that good in those moments.
Then again, I'm sure if he hits that three over Kobe Bryant to win it, today's water cooler talk would be about LeBron winning games that don't matter.
Go figure.
Nonetheless, in a rare occurrence, I will defend the self-proclaimed "King". This time, whether you are a fan, a hater, still in disgust, reside in Ohio (which is an whole other level and temperament of hatred) or just don't care, the criticism is ill-advised and downright wrong.
In fact, James' should be commended.
Whoa, whoa, whoa! What?! Are you feeling okay?
During a weekend where the NBA decided to turn their once anticipated event and the reputation of sport's best All-Star event into a farce with overrated celebrities, poorly executed skits, watered down play, glow-in-the-dark uniforms, cameras in participant's headbands, and an overall flash over substance product, James was a superstar amongst stars that broke the mold. Why? He put on a true show.  A show no one else made the effort to put on. James engaged in a missing ingredient that somehow has fallen through the cracks in recent NBA All-Star Games and has long abandoned the NFL Pro Bowl - competition.
The MLB All-Star Game, despite the quirky and silly gimmick of the winning league earning home field advantage in the World Series still has the best on-field product All-Star Game in sports.
James, taking a page out of the MLB's playbook, poured in point after point, while playing defense on the other end of the floor to help spur the Eastern Conference's comeback. Ironically, he was helped by Heat teammate, Dwyane Wade, who also competed, finishing with a triple-double.
In a game where players coast, throw lobs to one another, stand in amazement on defense, and claim to be "putting on a show" for the fans, James gave the fans what they really wanted - competitive basketball.
It is why we tune in all year. It is why we are hooked, and to be honest, it is why we hate his team, the Miami Heat.
Competition.
The REAL show.
Yet, somehow, James is thrown under a bus for making an effort to win a game no one else cared about.
James is ridiculed for giving effort during a weekend that is supposed to be dedicated to us - the fans.
And he's the bad guy for competing?
LeBron James is hated for a lot of reasons, and I can write another column solely on those reasons, but never, ever, will I knock an athlete for competing.
For the first time, in a long time, it seems we're the ones making the wrong decision.